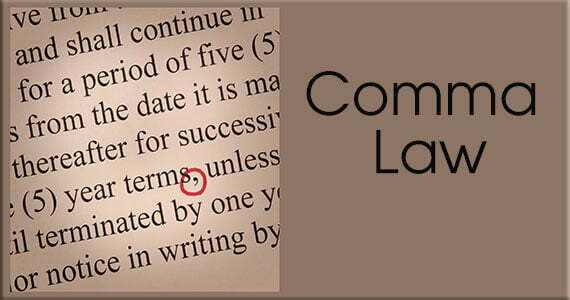 The writer who neglects punctuation, or mispunctuates, is liable to be misunderstood for the want of merely a comma .  .  .      – Edgar Allan Poe

This adage humorously demonstrates the significance of proper punctuation in determining meaning, and the potential cost for not heeding it. [1] Precision in punctuation has lost much ground in the last 30 years since the emergence of short, frequent, informal emails, texts and tweets replaced letters and reports as the preferred form of casual written communication between people and in companies.  Meaning may be confused by punctuation in ordinary written communication, but the consequences are usually more serious in formal written communications such as contracts and other legal documents.  The interpretations are adversarial and the stakes can be very high.

In 2002 Rogers Communications entered into a support structure agreement (SSA) with Bell Aliant, which granted Rogers access to transmission poles at the rate of $9.60 each per year.  Rogers’ access to these poles permitted connections of its telephone and cable services to homes throughout Canada.  Bell Aliant was an agent of NB Power and did not own the poles itself.  The five-year agreement was set to expire in May 2007.

However, in 2004 NB Power wanted to regain control of the poles and to raise the rates offered to companies like Rogers to $18.91, with a subsequent increase each year.  Bell Aliant notified Rogers that its SSA was cancelled and that the rate increase would be effective at the beginning of 2006.  Rogers Communications calculated that the SSA termination would cost it an additional $2.13 million to the original five-year deal. [2]

Defending the cancellation, Bell Aliant relied on a single clause in the SSA:

The devil is in the details, specifically in the last comma.  Since Bell Aliant wanted to sharply increase the pole rate and wanted the contractual flexibility to do that, it interpreted this clause as the right to terminate the agreement at any time, with one year’s notice.  Rogers, on the other hand, wanted to retain the current rate as long as possible.  It took the position that this clause meant the agreement could only be cancelled at the end of the current five-year term, as long as either party gave one year’s notice before the five-year term ended.

The dispute reached the federal Canadian Radio-television and Telecommunications Commission (CRTC).  The CRTC agreed with Bell Aliant citing “rules of punctuation.” The placement of a single comma may seem like boring, picayune stuff, but you never know when ignoring the precise punctuation details will make a huge difference in legal outcomes. Placing the comma before the word “unless” meant that both antecedent phrases preceding the comma were modified by the phrase following the comma.  A comma, placed here, closed the clause and dictated that what followed served to qualify the entire preceding section. Had the comma not been before the word “unless”, the phrase “unless and until terminated by one year prior notice in writing by either party” would have only applied to the immediately preceding clause, “thereafter for successive five (5) year terms,” and not any other clause before it.  If the meaning was to limit the right to terminate the agreement at the end of the five-year term, the clause would have not included a comma placed before the word “unless” and there would have been a clear indication of the date whereby the right could be granted.  Accordingly, the CRTC found this clause “clear and unambiguous.”  Applying the “plain and ordinary” meaning, Bell Aliant was permitted to legally terminate the 2002 SSA without cause at any time (Telecom Decision CRTC 2006-45).

The CRTC agreed with Bell Aliant citing “rules of punctuation.”

Ken Adams explained the decision in this way: “The CRTC’s analysis seems pedantic, in that it would be unreasonable to assume that drafters grasp the implications of every comma.   But as a way of resolving a dispute, consulting a few books on punctuation is certainly quicker than delving into the intent of the parties.”  Adams said this clause could have been more clearly stated by separating it into two sentences, as follows: [3]

The Law of Punctuation

There is scant common law on how such interpretive disputes are to be resolved in Canada.  The case of Mo-Tires Ltd. v. Canada (National Revenue) provides some direction regarding interpretation of clauses, but it fails to establish a framework for interpreting using commas, semi-colons, and periods in legal documents.

The tribunal concluded that the semi-colon created two separate antecedent clauses and Mo-Tires had to pay taxes to Revenue Canada on both its re-treading service and the original casings.  Mo-Tires was one of the very few cases that provide guidance for the Rogers comma case.

Duality and Equality of Languages

Section 16 of the Charter of Rights entrenches the equality of both official languages, French and English:

English and French are the official languages of Canada and have equality of status and equal rights and privileges as to their use in all institutions of the Parliament and government of Canada.

Federal legislation [4] confirms that French and English versions of legislation are equally valid.

In early 2007, Rogers Communications applied for a review of this ruling to the CRTC (Telecom Decision CRTC 2007-75), arguing that the French version of this clause had also been accepted by Bell Aliant and it was not ambiguous:

The English and French versions of this contract were written as the result of a single process to develop a uniform and standardized agreement.  In support, Rogers cited a 2006 CRTC decision that emphasized the value of uniformity in SSAs between two other Canadian telecommunications companies, Sogetel Inc. and Téléphone Milot Inc. (Telecom Order CRTC 2006 223).  Rogers argued that the first ruling violated this uniformity principle.  Although two interpretations were possible with respect to the English version of the SSA, the French version provided clear evidence that each party intended to restrict termination without cause to the end of the five-year term.  Rogers also noted that the Commission’s first ruling rendered the parties’ agreement to a five-year term meaningless because either party could terminate the agreement at any point without cause.

The CRTC agreed and reversed its previous decision and ordered Bell Aliant to fulfill its contractual obligations until mid 2007.

Rogers Communications proved that its intended meaning in the subject contract clause was affirmed when the French version of the agreement was invoked.  However, while it won that battle, Rogers ultimately lost the war and had to pay the price increase and hefty legal fees.

In the end, further technicalities removed the effect of this win for Rogers.  The CRTC, whose authority derives from the Telecommunications Act, found it did not have jurisdiction to enforce any obligations between Rogers and Bell Aliant with respect to poles owned by provincially regulated power companies.  Therefore, while the contract was binding on Bell Aliant for 5 years, the CRTC could not prevent a NB Power price increase (Telecom Decision CRTC 2008-62). When this decision was revisited in 2008, the CRTC decided that since NB Power controlled the transmission poles, Bell Aliant was not required to fulfill its contractual obligations after 2004 with respect to providing access to NB Power-owned transmission polls.  The CRTC found Bell Aliant free of its contractual obligations after 2004 and it had no power to control NB Power’s prices.

In 2009, Rogers submitted an application to review and vary the 2008 decision and sought damages for the increase in fees for the poles from Bell Aliant but the CRTC refused to reverse its decision or award damages, stating it does not have the authority to award damages ( Telecom Decision CRTC 2009-187).  Rogers did not appeal this decision to the Federal Court of Appeal.

Rogers Communications proved that its intended meaning in the subject contract clause was affirmed when the French version of the agreement was invoked.  However, while it won that battle, Rogers ultimately lost the war and had to pay the price increase and hefty legal fees.

Both of these large companies, and many others watching this dispute learned the lesson that punctuation matters, especially in legal documents. In Mo-Tires, the issue was whether a semi-colon (or a period in the French version) at the end of the paragraph created two separate independent clauses, or whether the semi-colon merely constituted a pause in a single clause  The placement of a single comma may seem like boring, picayune stuff, but you never know when ignoring the precise punctuation details will make a huge difference in legal outcomes.

The failure to punctuate a single clause correctly may open the door to an entirely different – indeed contrary – meaning which inexorably will lead to risky, expensive, and prolonged litigation.

As the T-shirt says: “I love cooking my family and my dog.  Use commas.  They save lives.”

And a lot of money.

Johnathon Layton recently earned a B.Comm. at the Haskayne School of Business, University of Calgary (2014).