On March 11, 2020, the World Health Organization (WHO) declared COVID-19 – an infectious disease caused by a new coronavirus – a global pandemic. With no vaccines or treatments to control the disease, the WHO asked governments “to take urgent and aggressive action to stop the spread of the virus”.

Freedom of movement is a human right protected by domestic laws and international treaties …In order to address the COVID-19 outbreak, governments around the world took strict measures and curtailed their citizen’s freedom of movement. Borders of countries, states, provinces, counties and cities all over the world closed. Lock-downs and quarantines obstructed non-essential movement outside of the home. People were required to stay home, to abstain from going to work or school. Restaurants, stores, offices, museums, playgrounds, gyms, etc. also closed. In addition, public gatherings like religious services, concerts, social and sporting events were cancelled. Government and health officials also asked people to keep a safe distance from each other whenever they did go out.

When can freedom of movement be restricted?

Of all the specific liberties which may come into our minds when we hear the word ‘freedom’, freedom of movement is historically the oldest and also the most elementary. Being able to depart for where we will is the prototypal gesture of being free, as limitation of freedom of movement has from time immemorial been the precondition for enslavement.

Freedom of movement is a human right protected by domestic laws and international treaties, including the Universal Declaration of Human Rights (article 13) and the International Covenant on Civil and Political Rights (ICCPR) (article 12). Both documents guarantee the right of everyone to leave any country including their own country and to return to it. They also protect the right of everyone lawfully in a country to move freely within the territory of that country.

Concurrently, article 25 of the Universal Declaration of Human Rights states that everyone has the right to a standard of living adequate for the health of himself and of his family. Also, article 12 of the International Covenant on Economic, Social and Cultural rights (ICESCR) recognizes the right of everyone to the enjoyment of the highest attainable standard of health, and asks governments to take steps to prevent threats to public health and to provide medical service to those who need it.

In order to address the COVID-19 outbreak, governments around the world took strict measures and curtailed their citizen’s freedom of movement.Human rights are interdependent. Therefore, the right to freedom of movement is not absolute and can be restricted when needed for the public’s health. Article 12(3) of the ICCPR allows restrictions on the right to freedom of movement for reasons of public health and national emergency. However, these restrictions must be lawful, necessary and proportionate. “Restrictions such as mandatory quarantine or isolation of symptomatic people must, at a minimum, be carried out in accordance with the law”.

In addition, according to the Siracusa Principles – principles that determine the conditions under which restrictions on civil liberties are justified – any steps taken to protect the public and limit people’s rights and freedoms must be “legal, proportionate and necessary”. These measures have to be limited in time and need to take into consideration their impact on vulnerable and marginalized groups.

A right to health also includes the right to control the spread of infectious diseases via a variety of control measures, some of which are restrictive. The use of restrictive measures during infectious disease outbreaks, including measures like quarantine, isolation, and travel prohibitions, restrict or limit basic human rights prescribed by the Universal Declaration of Human Rights, such as freedom of movement (Article 13) and the right to peaceful assembly (Article 20), for the sake of protecting and promoting the health of individuals and communities. 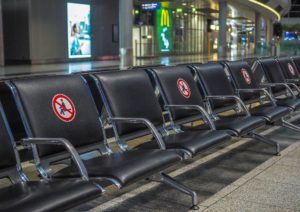 Photo by Michael Gaida from Pixabay

Unfortunately, the extent and danger of the COVID-19 pandemic threatened public health all over the globe. This justified restrictions on certain fundamental rights and freedoms, such as imposing travel bans, quarantine and isolation.

People in China were asked to stay home. About 760 million people were confined to their homes. In the United States, millions of people were ordered to stay home. The U.S. government also denied entry to non–U.S. citizens traveling from China, Iran and most of Europe, and was screening travellers returning from heavily hit countries.

In Australia, the government banned entry to anyone who had travelled to China, with exceptions for Australian citizens, permanent residents and others. However, once they arrived in Australia, they were required to “self-isolate for 14 days.”

Italy, which was badly affected by the virus, imposed harsh restrictions on freedom of movement – the worst in Europe since World War II. Sixty million Italians were not allowed to leave home except (and only with written permission) for work, health and other justified urgencies.

Section 6 of the Charter of Rights and Freedoms (the Charter) gives Canadian citizens and permanent residents the right to travel freely within the country, and to leave and enter Canada whenever they want.

These democratic rights are not subject to the Charter’s notwithstanding clause (section 33). Therefore the government cannot enact legislation that restricts people’s freedom of movement – unless it can be justified by the government under Charter section 1.

But in order to control the COVID-19 pandemic, the Centre for Constitutional Studies argues that the federal, provincial and territorial governments had to take various measures that curtailed people’s freedom of movement. These include restrictions on leaving and returning to Canada, as well as limiting travel within the country. The Canadian Civil Liberties Association notes that people were also required to stay home and asked not to interact with others, including not being able to see family and friends.

These restrictions on free movement were extraordinary in Canada and opened the door to a possible Charter violation of section 6. However, under section 1 of the Charter – which permits reasonable limits on protected rights and freedoms – the government can infringe on the right to free movement if it is deemed necessary to stop the spread of the virus and protect public health.

The Centre for Constitutional Studies stated:

In order to justify its actions, any government travel restriction must be reasonable and demonstrably justified in a free and democratic society. If a court decides that the government has made its case for justifying its actions, the breaches will be deemed constitutional. If they do not, then the government would need to stop its travel restrictions because they would be unconstitutional. For this reason, Section 1’s limitation clause is of great importance in ensuring that the government does not overstep when it breaches the section 6 rights of Canadian citizens, but also, allows the government to provide a rationale for a breach in specific circumstances.

The Canadian Constitution permits restrictions on some liberties where the health and safety of Canadians is at stake, there may be a greater public good that requires the breaching of some individual rights.

… the right to freedom of movement is not absolute and can be restricted when needed for the public’s health.Section 7 of the Charter guarantees life, liberty and security of the person. These rights may be at risk when people cannot go to work and earn a living, and are told to isolate or avoid going out whenever they wish. Also, a travel ban on Canadians by not allowing them to enter or leave the country can also breach section 7 of the Charter. However, this violation would also be legal if justified in a free and democratic society under section 1.

In an Ontario case, Basrur v Deakin, [2002] OJ No 2777 (ONCJ), Mr. Deakin suffered from tuberculosis. He did not consent to treatment and requested the protection and support of the Charter. However, the Court upheld the extension of the period of detention and treatment of Mr. Deakin. According to health experts, “what was done to Mr. Deakin was carried out for the protection of public health and the prevention of the spread of tuberculosis, a disease … described as extremely contagious” (at para 26). Therefore, the Court decided “Mr. Deakin’s rights under section 7 of the Charter have indeed been violated. But those breaches were justified” (at para 31).

For someone like me, for whom freedom of travel and movement were a hard-won right, such restrictions can only be justified in absolute necessity.

In a democratic society, there should be a balance between fundamental freedoms and public health and safety. When a health issue – such as a pandemic – threatens a whole population and presents a serious danger to others, curtailing our individual freedoms is justified and necessary in order to protect others and ourselves.