A Website of The Centre for Public Legal Education Alberta
You are here: Home / Feature Articles / 38-3: When it Hurts to be Home / Including Pets in Protective Orders
Reading Time: 4 minutes 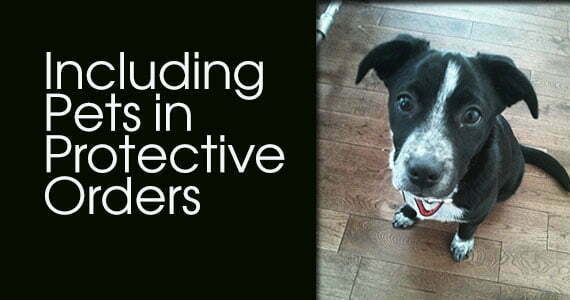 There is a growing awareness of the importance of pets to their owners, and especially to victims of domestic violence who rely on them for comfort and security at a time when they are most needed. Perpetrators of violence know this too – which is why they often threaten, harm, or even kill the pets of their victims as a way of controlling them.

As long ago as 1904, visionaries like Louise McKinney recognized the connection between animal cruelty and family violence.

Numerous studies have demonstrated this dynamic. The Alberta SPCA’s study “Inside the Cruelty Connection: The Role of Animals in Decision-Making by Domestic Violence Victims in Rural Alberta” (2012) found that 59% of pet-owning women in emergency shelters delayed leaving the abusive environment out of concern for their pets. In 36% of the cases, animals were threatened by the abuser – and 85% of those threats were carried out. Interviews with victims show how difficult it can be for women with pets or livestock to leave a violent relationship, and how the animals suffer as an abuser controls the victims by threatening or harming the animals.

In addition, children often (85% of the time) witness the threat or harm to the animal – and in half of the situations it is the child’s own pet. This undoubtedly causes emotional distress to all the victims in such situations, and the thought of escaping a violent home while leaving the animal behind becomes an impenetrable barrier to seeking help.

Not that this knowledge is new. As long ago as 1904, visionaries like Louise McKinney recognized the connection between animal cruelty and family violence. Louise petitioned her peers to form humane societies and promote humane education as ways to counteract violence. Other historical figures also connected the dots and saw the need for animal cruelty laws to help build a more compassionate society.

So, with the growing body of empirical evidence, is the law keeping up? Specifically, is there adequate legal protection for animals – not just for the animals’ sake but for their human owners who won’t, or can’t, leave their beloved companions behind?

Protective orders cannot be written to protect pets for their own sake. However, pets can be included if doing so will help protect the person for whom the order is written.

There are some legal devices available to those who need protection from a spouse or other family member. Known collectively as “protective orders,” these vary from province to province and may be known as emergency protection orders, restraining orders, peace bonds or other names. These may have various purposes – for example, they may allow the victim a certain time period to return home to collect valuables, or they may prohibit a spouse from being in proximity to the victim.

So where do pets fit into this puzzle?

In Canada, only the province of Newfoundland and Labrador directly specifies that animals may be included in such orders. In that province’s Family Violence Protection Act  “property” means an interest, present or future, vested or contingent, in real or personal property, including companion animals…” This doesn’t mean, however, that animals may not be included in protective orders in other provinces.

Protective orders are made by a judge in court or by police to help protect one person from another. A protection order contains a condition that affords safety and security to a specified (named) person or persons. Protective orders cannot be written to protect pets for their own sake. However, pets can be included if doing so will help protect the person for whom the order is written. In other words, to get a pet included, the applicant claims that her concern for the animal is related to her own protection. The above-mentioned Alberta SPCA study or similar research findings may be submitted to strengthen the claim.

Wherever there are no specific provisions for pets or livestock in provincial protective order laws, the broad discretion of the court may allow for their consideration in most protection orders.

While some may bristle at the thought of pets being property, in fact, this is how they can be protected – as long as it is recognized that the pet’s safety is necessary to providing safety for the (human) victims. Many people consider pets to be family members, but under the law they are not. However, using the principles stated above can help to ensure their safety, and that of their vulnerable owners as well.

The Alberta SPCA has several resources on the connection between animal cruelty and domestic violence, including a pamphlet on animals in protective orders and a study on Court Protections for Domestic Violence Victims and their Pets conducted by Student Legal Services of Edmonton in 2012. 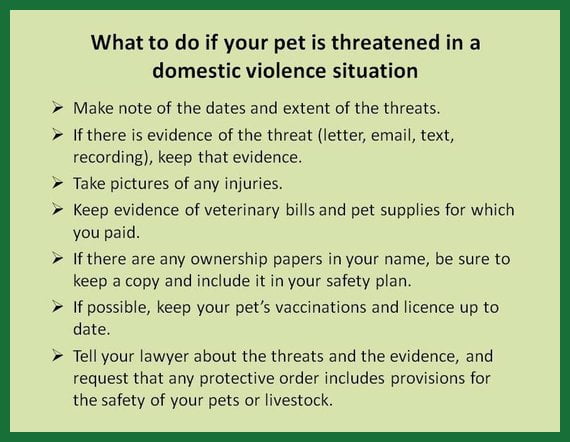 Tim Battle is the Director of Education for the Alberta SPCA.