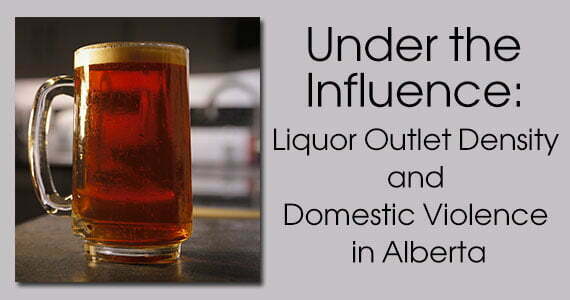 We have too many liquor outlets in Alberta. Okay, we said it. This is a conversation that most Albertans don’t want to have.

In 1993, Alberta became the only Canadian jurisdiction to fully privatize the sale of alcohol. Since then, we have gone from 200 liquor outlet stores to over 2,000.

Evidence associates high levels of liquor outlet density with increasing rates of alcohol consumption and violence, including domestic violence. This correlation is evident in Alberta, where rates of domestic violence are among the highest in Canada (Statistics Canada, 2011).

In an analysis of 6,407 domestic violence cases in Calgary spanning from 1998 to 2009, Tutty et al. (2011) found After Alberta’s liquor industry was privatized, rates of violence involving alcohol rose dramatically, jumping 20 per cent in the year after privatization. that police identified alcohol use in 61% of the accused and 28% of the victims at the time of the incident.

The availability of alcohol alone would not cause violent behaviour; In Alberta, municipalities can take the lead on tackling the effects of liquor outlet density at the neighborhood level by creating better alcohol density control measures. however, when combined with pre-existing gender expectations which render violence and drinking as acceptable male behaviours, it can be a contributing factor (Peralta and Steele, 2011).

Calling on Alberta’s Municipalities and Citizens

In Alberta, municipalities can take the lead on tackling the effects of liquor outlet density at the neighborhood level by creating better alcohol density control measures. The implementation of such measures in other jurisdictions has been associated with reduced rates of violence (Mair and Mair, 2003; WHO, 2005).

At the local level, land use bylaws are the main vehicle through which municipalities can impact outlet density. Community mobilization and municipal regulations that limit alcohol outlets, especially in high density areas, can send a strong message about the kind of neighborhoods and society we want for ourselves and our families. For example, municipal regulations for Calgary and Edmonton require a minimum distance between liquor stores of 300 and 500 metres respectively.

Whereas Calgary applied the regulation to new applications only, Edmonton attempted to address existing liquor outlets, stipulating that if two or more alcohol outlets were within 500 metres of one another, they were considered non-conforming and were expected to relocate or consolidate (City of Edmonton, 2007).  While moving in the right direction, these policies need to be supported by more robust measures.

Municipalities could take a stronger stance by introducing a moratorium on new licenses in communities with higher liquor outlet density. In areas that already have a high concentration of liquor stores, municipalities could consider relocation and consolidation as a means of addressing density retroactively. Municipalities could strengthen zoning regulations to address density by using a combination of population- and geographic-based formulas to restrict the number and location of alcohol outlet licenses.

Citizens should be encouraged to participate in alcohol liquor license application hearings. The Alberta government could facilitate this by amending Section 129(1) section 57(1) of the Gaming and Liquor Act (2010) to include a requirement stating that anyone applying for a new retail liquor outlet license must notify the public of their intent.

There is no doubt that simply controlling liquor outlet density will not eradicate domestic violence. The root causes of domestic violence are much more complex and require a full-scale revamping of public policy and interventions, but also individual norms and belief systems.

However, density controls are a promising solution that can be implemented to reduce a range of social harms, including domestic violence, at the community level. Community mobilization and municipal regulations that limit alcohol outlets, especially in high density areas, can send a strong message about the kind of neighborhoods and society we want for ourselves and our families.

For a more robust discussion on this issue, please see our research report at http://preventdomesticviolence.ca/research/role-alcohol-outlet-density-reducing-domestic-violence-alberta