You are here: Home / Feature Articles / 38-2 Birth and the Law / Midwifery in Canada
Reading Time: 7 minutes 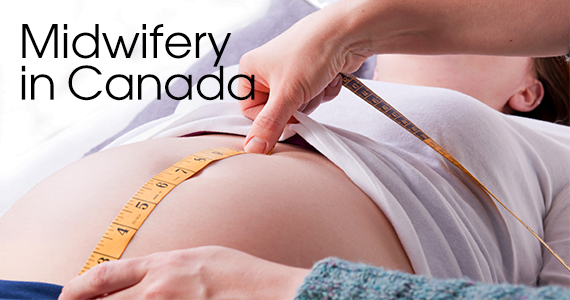 Midwifery is a health care profession distinct from nursing.  Midwives specialize in providing primary care to women during pregnancy, labour, birth and postpartum in relation to low risk prenatal, intrapartum and postnatal care.  They promote the natural birthing process of normal vaginal deliveries without drugs or surgical interventions, and are trained to handle low risk normal births as well as breech births and twin births.  They are trained to provide physical examinations, screening and diagnostic tests, and to assess the normal progress of pregnancy and birth, including detecting complications and making assessments of risks in mother and child, at which point they would refer the women to physicians.

Although midwifery had been practiced throughout history, some with formal training and some without, it was rejected as folk medicine in Canada and the United States in the early 20th century in favour of modern advancements in the medical profession.  Consequently, midwifery was either replaced by medical doctors (obstetricians) or regulated.

In Britain, midwifery legislation was implemented in England and Wales in 1902, Scotland in 1916 and Northern Ireland in 1918.  In 1925, the United States adopted a nurse-midwifery model from Britain, which was a combination of nurse and midwife, requiring training in both; although primary care for childbearing women continued to be provided by nurse-midwives, family nurse practitioners and physicians.

Starting in the 1990s, midwifery began to be legally recognized as a profession in certain Canadian provinces and territories by the introduction of provincial or territorial legislation to regulate midwifery.

In Canada, midwifery falls under provincial and territorial jurisdiction, and has only been recognized in relatively recent times.  Starting in the 1990s, midwifery began to be legally recognized as a profession in certain Canadian provinces and territories by the introduction of provincial or territorial legislation to regulate midwifery.  In 1994, Ontario and Alberta were the first provinces to implement legislation to regulate midwifery.  In Canada, the midwifery model promotes normal birth, women as the primary decision maker (by providing women with information so they can make informed decisions about the birthing process), and continuity of care (from pregnancy to postpartum).

In Alberta, midwifery was legally recognized and regulated by the Midwifery Regulation, Alta. Reg. 328/1994, which was implemented under the Health Disciplines Act, R.S.A. 2000, c. H-2, as a result of the 1989 application by the Alberta Association of Midwives for designation under the Act.  The Act mandated that a health discipline association establish a governing body to, inter alia, manage its affairs and govern the registered members of the health discipline in accordance with the Act, regulations and bylaws in a manner that serves and protects the public interest; and establish examinations for the purposes of registration and renewal of registration, standards of conduct and competencies for registered members, standards for continuing competency, and develop and maintain standards of professional ethics for registered members. Midwives have been required to register with the Alberta Midwifery Disciplinary Committee to practice in Alberta since 1992. The College of Midwives of Alberta is the provincial regulatory body.

The Regulation, inter alia, details the criteria for registration of midwives; specifies standards of conduct of registered midwives; and provides for the establishment of a practice review committee and a conduct and competency committee.  It specifies the permitted activities and scope of midwifery in Alberta, which includes, inter alia:

The Regulation expressly limits the scope of the practice of midwifery as the primary health care provider to “normal” pregnancies, and mandates that midwives shall consult with physicians in accordance with the guidelines of the governing board if medical complications exist or arise during the course of midwifery care that may require management by a physician.

The mother’s birth options are at hospital, home or birthing center.  Midwives have been fully funded through the government since 2009 and there is no fee for service.

In 1986, the Ontario government announced it would establish midwifery as a regulated part of the health profession. This was the consequence of a jury recommendation regarding the practice of midwifery that arose from a court case involving the death of a baby delivered by midwives.  Ontario was the first province to regulate midwifery in Canada, through the following provincial legislation:  Regulated Health Professions Act, 1991; Midwifery Act, 1991, S.O. 1991, c. 31; General, O. Reg. 240/94; Registration, O. Reg. 168/11; Designated Drugs, O. Reg. 884/93; and Professional Misconduct, O. Reg. 388/09.  Since the regulation was implemented in January 1994, in order to practice in Ontario, midwives are required to be registered with the College of Midwives of Ontario and must abide by its bylaws, with the exemption in the Acts for aboriginal midwives and healers (to use the title of aboriginal healer and to provide their traditional midwifery services to aboriginal persons or members of aboriginal communities).  The College’s vision statement of June 2001 stated that midwifery care in Ontario was defined by ongoing support for community-based midwives working in partnership with childbearing women and expressed a commitment to the accessibility of midwifery as a viable option for childbearing.

Other Canadian Provinces and Territories

Midwifery is now regulated in all provinces and territories except for Prince Edward Island and Yukon where it is unregulated and unfunded, the only birth option with midwives would be at home, and mothers would pay for services of midwives.

In Newfoundland and Labrador, midwifery is governed by the Health Professions Act, which was assented to on June 24, 2010; however, there are no licensed and practicing midwives in that province.

The implementation of midwifery regulation in each of:  Quebec (1999), Manitoba (1997), the Northwest Territories (2003), Saskatchewan (1999), Nova Scotia (2006), and Nunavut (2008), mandated that midwives register with the regulatory bodies in these provinces or territories, as created by their respective legislation, in order to practice there.  Each province or territory implemented its own set of legislation to regulate midwifery within its own jurisdiction; and each established its own regulatory body (college or board) under their respective legislation.  Essentially, a midwife must register with the regulatory college or board in the province and territory that s/he will practice, and abide by the specific legislation and bylaws of the college or board, which sets out the scope of the practice of midwifery in that jurisdiction.  Midwives are required to obtain professional liability insurance through the Healthcare Insurance Reciprocal of Canada (HIROC).

The Canadian Midwifery Regulators Consortium is a network of all of provincial and territorial midwifery regulatory bodies.  Its mandate is to facilitate mobility across the provinces and territories; to advocate for access to a high standard of midwifery and to provide a forum for discussion of mutual concerns.  The Consortium created a website for internationally educated midwives to access information in relation to registration in the provinces and territories.  There are two bridging education programs for internationally trained midwives:   the Multi-Jurisdictional Midwifery Bridging Project to assist qualified midwives educated  outside of Canada to meet the requirements for registering and practising in British Columbia, Alberta, Saskatchewan, Manitoba, Nova Scotia and the Northwest Territories; and the International Midwifery Pre-Registration Program which is a part-time nine-month bridging program for experienced international midwives, who have practiced in the last five years, are fluent in English, and who wish to practise in Ontario.