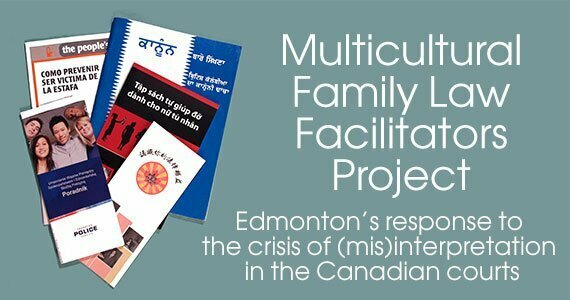 This article briefly describes the Multicultural Family Law (MFL) Facilitators project developed by United Cultures of Canada Association, Family Law Office (Legal Aid Alberta) and ASSIST Community Services Centre with financial assistance provided by the City of Edmonton – Community Services. In the first phase of the project, a training program was developed. Ad hoc interpreters often fail to show up, or interpret so poorly that the evidence is lost.  Many do not understand their professional obligations or legal liability. The first group of Multicultural Family Law Facilitators received training to provide legal interpreting at court and non-court legal events and cultural education in relation to family law in the following languages: Arabic; Cantonese; Dinka; French; Hindi; Lingala; Malayalam; Mandarin; Punjabi; Spanish; Swahili; Tami; Tagalog; Tshiluba and Urdu.  A second group is currently undergoing training to offer services in Persian, Russian, Ukrainian, Italian, Polish and German. These services are available free of charge until the end of June 2014. The training of the Facilitators is based on the guidelines provided by the National Standard Guide for Community Interpreting Services, published by Healthcare Interpretation Network in 2007 to “promote the highest quality of interpreting when adopted for assessment, training, hiring, performance monitoring and possible future professional recognition.”

Following the economic boom in 2007, Edmonton recorded a population growth rate of approximately 12%. The article “Edmonton Indicators 2006 – 2011 Census Population: Edmonton Population Growth Accelerates” indicates that, in this period, Alberta was the “fastest growing province” led by Calgary, Edmonton, and Wood Buffalo. The report, “The Way We Live: Edmonton’s People Plan 2010” notes that the city has welcomed 135,000 people in the past decade and is now home to “over 50 international cultures and 70 unique ethnic groups.”

The Canadian Charter of Rights and Freedoms (s. 14) grants every citizen the right to the services of an interpreter during court proceedings.

The article “Misinterpretation: Crisis in Canadian Court Interpreting” discusses an important aspect of changing demographics: “As Canada becomes more multicultural, a shortage of skilled interpreters is creating major problems with the administration of justice in courtrooms across Canada.” Further, “[w]hen 3.4 million Canadians speak neither English nor French at home, and 521,000 are unable to speak either official language, concern is rising that language barriers could be denying them access to the justice system.”

In Canada, political rights of individuals include the right to a fair trial. The Canadian Charter of Rights and Freedoms (s. 14) grants every citizen the right to the services of an interpreter during court proceedings. [1] While a communication handicap can restrict a person’s access to justice and ability to exercise legal rights, inaccurate interpretations can put the handicapped person at a risk of failing to receive justice. The unavailability of interpreters can affect and impede the administration of justice, but lack of professionally trained interpreters can impact the outcome of legal proceedings and result in mistrials. As reported in the article “Misinterpretation: Crisis in Canadian Court Interpreting”:

Mistrials have been declared because inadequate interpretations breach s. 14 of the Charter. The Supreme Court ordered a new trial in R. v. Tran [1994] S.C.J. No. 16 because an interpreter was only summarizing evidence rather than giving a full translation.

In one noted Ontario case, R. v. Sidhu, [2005] O.J. No. 4881, where Avtar Sidhu was charged with assault causing bodily harm, Justice C. Hill ruled that the Charter rights of the accused had been violated because of inaccurate interpretation. [1]

A judge in Scarborough throws out a drunk-driving case due to delays in finding a Tamil interpreter.

“As Canada becomes more multicultural, a shortage of skilled interpreters is creating major problems with the administration of justice in courtrooms across Canada.”

An assault conviction is tossed aside in Brampton because of incompetent Punjabi translation.

A judge in downtown Toronto declares a murder mistrial for lack of an interpreter in Oromo, an African language.

Sidhu has launched a $35 million class action lawsuit against the ministry on behalf of people who have suffered due to poor interpretation.

Approximately five years ago, I began to notice an increase in clients coming from what are often referred to as “immigrant” or “ethnic” communities. Crimes in ethnic communities are sometimes perpetrated under the guise of cultural norms. Perpetrators of such crimes often try to convince their victims and the intervening authorities that their criminal behaviour is, in fact, a cultural practice. Many of these clients had been subjected to years of physical, sexual, financial, and emotional abuse, but had not been able to reach out for help. Language was often cited as a major barrier… In addition, their abusers would use cultural practices or threats to send their victims “back” to whatever country they had come from as a method of continuing the abusive power and control cycle.

I began to speak about these situations to my colleagues in family law as well as my contacts at the courts and in the Crown Prosecutors’ office. It became apparent that we were all facing similar challenges, in that not only did we have to explain the law to a client, but we had to do so through interpreters who did not adequately understand the law themselves.

Ad hoc interpreters often fail to show up, or interpret so poorly that the evidence is lost.  Many do not understand their professional obligations or legal liability. Regrettably, no agency in Edmonton is currently offering professional interpretation services, while available translation services are prohibitively expensive to someone in a crisis situation.

Another critical factor that Dawn Nelson draws attention to is cultural challenge: “At the same time, our clients had to explain their unique situations, including religious and cultural “norms” that were being manipulated to perpetuate and exacerbate the abuse, and we had to quickly formulate an understanding of their precarious immigration status or ingrained distrust of authority.” She also mentions frustrations of her colleagues when their clients withdraw their applications for protection orders or recant their testimony in criminal assault trials.

In immigrant families, the perpetrator sometimes is also the sponsor of the victim. If a sponsorship application for the victim is still in the process, the abusive sponsor may threaten to cancel it. Domestic crimes in immigrant families sometimes transcend international boundaries. Examples of such crimes include international child abduction, notorious transcontinental ex-parte divorces where one spouse is a foreign national, and fake, fraudulent, or forced international marriages that share many characteristics with human trafficking. Many ethnic groups that migrate to Canada come from countries that follow different systems of family law. All these issues add new variables to family violence situations in immigrant communities.

Crimes in ethnic communities are sometimes perpetrated under the guise of cultural norms. Perpetrators of such crimes often try to convince their victims and the intervening authorities that their criminal behaviour is, in fact, a cultural practice. Victims are confused about the way in which Canadian laws would apply to such situations. While victims fear that they may not receive culturally effective responses from the mainstream service providers, the service providers sometimes hesitate to intervene for fear of offending the victims’ cultural sensibilities. The Shafia sisters’ trial two years ago is a sad reminder of the necessity of understanding the often confused boundaries between crimes and cultures.

Service providers need reliable cultural information as cultural traditions and values are strongly embedded in social issues that fall under the scope of family law; mistrials can result from misinformation about cultural practices just as they can result from inaccurate interpretations. However, the popular thoughts in legal interpreting strongly recommend that interpreters maintain neutrality and refrain from cultural advocacy or brokerage. This made it important for us to develop an interpreter job profile that included cultural education as one of the job responsibilities but without violating the code of ethics for interpreters or causing a role conflict.

The profile of Multicultural Family Law (MFL) Facilitators that we have developed combines two roles.

In order to keep their two roles distinct from each other, the MFL Facilitators are instructed to fulfill only one role at a time. For example, they will not provide cultural or system-related information in conjunction with an interpreting session and will not discuss a client’s case during support services. They will not offer information, explanations, opinions or advice on any matter related to the legal case for which they have provided an interpreting service. Finally, the cultural information that they provide to service providers will not constitute part of their interpreting assignment.

If you wish to obtain further information about the project or provide your feedback, please contact Nayanika Kumar at 780 756 3979 or ucca@shaw.ca. For a service request, contact Amber Khan at 780 919 9720 or requestlegalinterpreting@aol.com.

1. The provision of interpreter services is a basic right of anyone who is a party or witness in court proceedings under s. 14 of the Charter, which guarantees the right of an accused to understand the proceedings. The Ontario Court of Appeal noted in R. v. Petrovic, [1984] O.J. No. 3265, that when an accused person requests an interpreter, an interpreter should be provided without question, and that the accused not be subject to a detailed inquiry into their ability to understand or speak the language of the proceedings. – Misinterpretation: Crisis in Canadian Court Interpreting

Nayanika Kumar, Ph.D., is the Program Manager at the United Cultures of Canada Association and Project Coordinator for the Multicultural Family Law Facilitators project.