You are here: Home / Special Report / 38-4 The Law and Persons with Disabilities / A Progress Report of Disability Rights since the Charter
Reading Time: 5 minutes 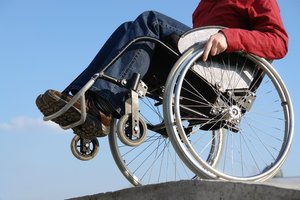 In 1982, the Charter of Rights and Freedoms formally enshrined equality rights into the Canadian constitution. Section 15 of the Charter reads:

For advocates of persons with disabilities, the final wording of this clause was the culmination of an extensive lobbying effort, as earlier drafts omitted to explicitly mention disability. With equality rights achieving greater constitutional status, the courts have faced the challenge of interpreting the provision to meet the modern concerns of disabled persons throughout the country.

For advocates of persons with disabilities, the final wording of this clause was the culmination of an extensive lobbying effort, as earlier drafts omitted to explicitly mention disability.

Although the courts have shown to be receptive to the goal of achieving substantive equality since the advent of the Charter in Canadian law, it is argued that the progress of disability rights in s. 15 jurisprudence has been more tempered in recent years, for reasons we shall see below. The issue warrants further attention and will require the conjoint efforts of both the courts and the legislature to improve the legal state of disabled persons in Canada.

The first decision of the Supreme Court on s. 15 grounds, Andrews v Law Society of British Columbia, [1989] 1 SCR 143, established a foundation upon which later decisions eventually built. The court refused to follow the formal equality approach (through the ‘similarly situated-similarly treated test’) that had pervaded much of the earlier case law and instead adopted a purposive approach to s. 15. In so doing, the Court placed an emphasis on substantive equality under the Charter, where “consideration must be given to the content of the law, to its purpose, and its impact upon those to whom it applies, and also upon those whom it excludes from its application” (per McIntyre J). This judgment provided a conceptual legal framework necessary for future discussions on equality in subsequent years.

Overall, the early case law on disability rights shows a move away from the inherently less accommodating approach of the pre-Charter towards a social model embracing substantive equality.

But in Eaton v Brant County Board of Education, [1997] 1 SCR 241, where a twelve-year-old girl with cerebral palsy was placed by the school board into a segregated classroom, the Supreme Court allowed the school board’s appeal. It held that there was no starting presumption of integration. Despite the disappointing decision, the Court’s reasoning elucidated an appreciation for the need for the state to provide persons with disabilities reasonable accommodation. The case reflected changing perspectives on the nature of disability rights at the highest level, albeit at a slow pace.

Human rights and disability advocates had much more to celebrate with the landmark and unanimous decision reached by the Supreme Court in Eldridge v British Columbia, [1997] 3 SCR 624. The case concerned deaf individuals who could not communicate with medical professionals because of the lack of interpreters. They succeeded in showing the Court that the governing legislation created adverse effects which amounted to discrimination. Overall, the early case law on disability rights shows a move away from the inherently less accommodating approach of the pre-Charter towards a social model embracing substantive equality.

The Difficulties with s. 15 Jurisprudence

The year 1999 was particularly important for s. 15 jurisprudence and its effects on disability rights. In British Columbia (Public Service Employee Relations Committee) v BCGSEU (British Columbia Government Service Employees’ Union), [1999] 3 SCR 3, better known as the Meiorin case, the Supreme  Court of Canada tackled a major conceptual problem with discrimination. The law, in effect, offered different remedies for direct prima facie discrimination and adverse effect discrimination. This bifurcation was eliminated in Meiorin. Justice McLachlin  (as she then was) emphasized that to uphold this distinction was to “[shield] systemic discrimination from scrutiny” and thus to undermine substantive equality.

The law, in effect, offered different remedies for direct prima facie discrimination and adverse effect discrimination. This bifurcation was eliminated in Meiorin.

At the same time, however, new s. 15 criteria arose in Law v. Canada (Minister of Employment and Immigration), [1999] 1 SCR 497. In Law, the focus was placed on whether a claimant has faced a “loss of dignity”. The Law criteria were strictly applied in Granovsky v Canada (Minister of Employment and Immigration) [2000] 1 SCR 703, where the appeal was dismissed because the legislation could not be said to demean the dignity of the individual facing a temporary disability.  One commentator said that the approach in Law “leaves much to be desired and marks a retreat from the early promise of substantive equality,” (Malhotra p. 274) and by another as “confusing, unpredictable, overly burdensome and excessively formalistic.” (Ryder, p. 517) Despite the progress seen in the case law, it seems that the s. 15 jurisprudence lacks clarity and puts the robust protection of the rights of disabled persons on uncertain ground.

Conclusions: A Move Towards the Future

… the Supreme Court has been reluctant to accept leave to appeal in s. 15 cases. This trend is troubling and is a cause for concern.

The present record of disability rights is one of cautious optimism. On the one hand, there has been enormous progress in the Supreme Court’s attitude towards Canadians with disabilities. This new social understanding should be lauded and provides strong encouragement for Charter litigation on disability rights in the future.

On the other hand, disability law has evidently faced difficulties since the Law decision. A 2010 study by Ryder and Hashmani of Osgoode Hall published in the Supreme Court Law Review indicates that the Supreme Court has been reluctant to accept leave to appeal in s. 15 cases. (Ryder, p. 518-19) This trend is troubling and is a cause for concern. Open and regular access to the courts is fundamental for Canadians with disabilities, without which the value and protection of the Charter’s equality and non-discrimination provisions substantially diminishes.

Nonetheless, there are some tentative positive signs on the horizon. Ontario was the first Canadian province to establish a legislative regime governing disabled persons with the Ontarians with Disabilities Act, 2001, SO 2001, c 32 (current version: Accessibility for Ontarians With Disabilities Act, 2005, SO 2005, c 11). This mirrors the activity by other jurisdictions, like the United States’ Americans with Disabilities Act (1990), or the United Kingdom’s Disability Discrimination Act (1995) (now known as the Equality Act (2010)). Similar legislative efforts country-wide should be encouraged.

Ontario was the first Canadian province to establish a legislative regime governing disabled persons with the Ontarians with Disabilities Act, 2001, SO 2001, c 32

Moreover, in 2010, Canada ratified the United Nations Convention on the Rights of Persons with Disabilities. This is a positive step that aligns Canada with the international community in recognizing the importance of accommodation and the protection of persons with disabilities. But Canada’s First Report on the Convention, which the Department of Canadian Heritage indicated was expected in 2012, has yet to be published.

In conclusion, the protection and support for disabled persons does not exist in a legal vacuum. A robust rights regime is certainly one crucial part of the full picture; the challenge lies not only in the provincial human rights tribunals and the courtrooms, but in legislatures and communities. Canada needs good policy that will address social problems which predominantly affect those with disabilities, including poverty, inequality, and inadequate education and health care. In this respect, Canada can and should do more to meet its domestic and international obligations towards persons with disabilities, both in law and public policy terms. Further progress is surely yet to come.

1. Ravi Malhotra, “Has the Charter Made a Difference for People with Disabilities? Reflections and Strategies for the 21st Century,” 2012 Supreme Court Law Review 58