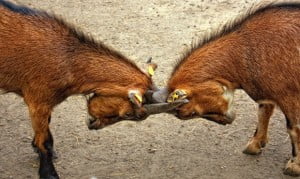 A few years ago, while stopped on a major road in congested Calgary commuter traffic, our vehicle was struck from behind by another vehicle.  We were hit with such force that our car was pushed into the car in front of us.  The road and visibility were excellent and we all knew the cause of the collision when the clueless driver from behind alighted with cell phone firmly planted in her hand.  She offered no other explanation for her inattention.

We exchanged personal information and were on our way.  As it turned out, this collision left us with a few minor whiplashes, a $300 mechanics bill and scratches on our car.  When we tried a few days later to follow up with the distracted driver who had slammed into us, she feigned complete ignorance and indignation.  …there is a consumer, or layperson, form of litigation, generally known as small claims procedure, where technicality, expense and time for the parties is reduced. She pretended not to have the haziest idea what we were talking about.  Out of fear or panic, or discernment, she hung up.  We knew we would never receive an apology, much less modest compensation.

Obtaining financial compensation from other individuals or companies is always a challenge, even when liability for it is clear.  The obstacles to recovering compensation are considerable:  including launching, winning and then collecting from a lawsuit.  It is an expensive, technical and time-consuming process and (because it is a human process) the outcome is never certain. For these reasons, voluntary, non-litigation alternatives to recovering compensation, such as negotiation, mediation and arbitration, are much touted.

However, litigation provides one major advantage, which is to force the other side to deal with the issue.  The other good news about litigation is that there is a consumer, or layperson, form of litigation, generally known as small claims procedure, where technicality, expense and time for the parties is reduced.  This article describes that procedure in Alberta.  The other provinces and territories have very similar procedures.

Occasionally, an agency or department of government may be able to help.  A claim and remedy may be pursued by the Human Rights Commission, the department of Occupational Health and Safety, the Employment Standards Branch (if you are owed wages) and Service Alberta, which assists with some consumer problems.

At the minimum, you can:

If these methods don’t work you can sue for and collect up to $50,000 in Alberta small claims court (technically called “Provincial Court of Alberta, Civil Division”).  You can hire a lawyer to help you if you wish but you can also do it on your own.  Anyone can support and assist your presentation of your case as your agent.  Most parties do not hire lawyers in this court and the judges try to make parties feel comfortable without one.

The few matters you cannot sue for in small claims court include:

Generally, you must start the lawsuit within two years from the time the matter (default on debt or accident, etc.) arose.  There are a few exceptions to this.  The small claims process is very well explained on the Provincial Court’s website.  If you are suing for a small amount of money – perhaps something under $1500 – the time and effort will probably not be worth it and it may be better to simply write the claim off. There is far more detail there than we can include in this article.  This website is an excellent resource and any party contemplating or engaged in a small claims action should read this information.

You have to name all the correct parties to the lawsuit.  For example, tenants recovering damage deposits must correctly identify the landlord and not just the property manager.  If you cannot locate the defendant, you will not be able to serve him with the lawsuit papers.

If you are suing for a small amount of money – perhaps something under $1500 – the time and effort will probably not be worth it and it may be better to simply write the claim off.  This is especially true if you do not expect the defendant to pay the judgment.  Collection on a money judgment can be expensive and frustrating.  If you are paying for a lawyer to run your case, the financial risk of “throwing good money after bad money” is even higher.  There are also non-economic costs of suing such as adverse publicity, stress and mental anguish, uncertainty, time to prepare and prosecute the case, and destruction of relationships.  We think you should not sue unless it is for a relatively large amount of money and you have a good chance of getting paid if successful.

For most people, especially the first time you start a lawsuit, it feels intimidating and adversarial. It is not an activity that most people do and many find it stressful and overwhelming.  If the stakes are high enough and the matter important enough as described above, you may rest assured that the small claims process will be as accessible, fair and comfortable as you will find anywhere in our whole legal system.  Most parties appear for themselves, unrepresented by lawyers, and this is precisely what this court is designed for.  The staff in the court clerk’s office and the judges are used to explaining and shepherding the parties and witnesses through the small claims process.

The court website contains all the forms and accompanying instructions.  The suing party (plaintiff) can complete the initiating form, the Civil Claim, online. For most people, especially the first time you start a lawsuit, it feels intimidating and adversarial. It is not an activity that most people do and many find it stressful and overwhelming. It is printed out, then taken and filed in the courthouse, where the matter arose, which is generally where the other party (defendant) resides.  The required court filing fee ($100 or $200, depending on the amount being sued for) is paid at that time.

A copy of that filed Civil Claim must be delivered to (“served”) on the defendant(s), along with a blank form called a Dispute Note that the defendant can fill in and file in the same courthouse.  In the Civil Claim, you must state what is called a “legal cause of action.”  That means you cannot just complain or write rambling hostile comments.  Rather, you must allege facts that give rise to and support an acknowledged legal claim.  For example, a claim may be based on a contractual debt that was not repaid, or allege that the defendant was negligent when driving, which caused you injury by a collision.

The plaintiff can take up to a year to serve the claim on the defendant but the defendant has only a few weeks to file the completed Dispute Note.  A Civil Claim should never be ignored because the plaintiff may return to the court and obtain default judgment when the defendant has not responded within the prescribed time, which is 20 or 30 days.  Even if the defendant wishes to negotiate with the plaintiff, he should first ensure a Dispute Note is filed on time to prevent this from happening.  The defendant may also make his own fresh claims, if they can be proven, by completing, filing with the court clerk and serving on the plaintiff a Counterclaim when the Dispute Note is filed. Research has shown that intervention by skilled neutral third parties can substantially assist the litigants to reach a settlement of their own. Serving these kinds of legal documents on people can be unpleasant and confrontational, so you can hire process servers to do that instead, although that will increase your costs.

It was common in the past that the parties would show up to the small claims trial without ever having even spoken with each other.  The commencement of the lawsuit had driven them farther apart.  Research has shown that intervention by skilled neutral third parties can substantially assist the litigants to reach a settlement of their own.  Often there were assumptions and misunderstandings, hurt feelings, distrust, anger or miscommunication between the parties that could be addressed and reduced through expert informal guiding by a mediator.  The parties are treated as equals who can explain and be respectfully heard and understood.  Many times the failure to hear and understand the other side is what precipitates and drives the lawsuit.

Instead of mediation, a pre-trial conference may be scheduled.  The parties meet informally with a judge, set out their positions and try to reach a settlement.  If this is not successful, the matter will be scheduled for trial before a different judge.

Decision and Its Enforcement

After the parties have finished presenting their evidence and summarizing their cases, the judge makes a decision.  Most often this is announced in the courtroom within a few minutes of the summations.

The parties will be sent a Certificate of Judgment.  That decision or judgment may be paid upon demand.  If it is not paid, you may move to seize the defendant’s property or garnishee money that is owed to him, such as wages.  Interestingly, if the judgment is related to a motor vehicle accident, you can contact the provincial motor vehicles department and ask that the driver’s licence of the defendant be suspended.

So, what did we do about the distracted driver who drove into our car during rush hour?  Given the small amount of money and minor nature of the injury involved, and the challenges we expected to encounter in litigation, we decided not to pursue any legal action against her.  Life is short.  Time is precious.  We have to carefully choose the battles we fight and this one was too inconsequential even for the rigours and uncertainties of an accessible, layperson-friendly small claims court. Sometimes it just makes the most sense to accept what happens in life and move on.