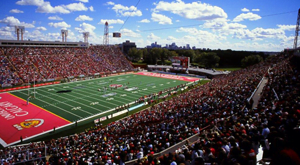 For as long as organized sport has been around, athletes have appeared to occupy a social class of their own. Held in the highest regard by their fans and with the ability to flaunt their ‘jock’ status, athletes have often been accused of not only receiving special treatment, but of acting entitled to that special treatment. Up until recently, this attitude had been shrugged off as the status quo, but as a new generation of athletes has emerged, it seems things have gone too far. Many critics are now citing a trend of what they call “sexual entitlement” among athletes, following several high profile episodes of sexual assaults involving athletes at the amateur, college, and professional level.

Newly familiar to this arena is the University of Ottawa, courtesy of their men’s varsity hockey team. In early February of 2014, the team travelled to Thunder Bay to face the Lakehead University Thunderwolves in a weekend double-header. During their stay, two of Ottawa’s players allegedly raped a 21-year-old woman in a Thunder Bay hotel room. While all of the players and coaching staff became aware of the incident within hours of its occurrence, no action was taken in the situation until University of Ottawa administration was informed almost three weeks later by a friend of the alleged victim. The University immediately contacted the police, and a week later, announced its decision to suspend the men’s hockey program for the balance of the season and to launch an internal investigation into the matter.

Some have criticized the University of Ottawa for disciplining the entire team for the actions of but a few – at least so harshly – in what is a criminal matter. This begs the question of jurisdiction in situations where athletes not only defy standards of decent conduct, but also cross the legal line. What are an institution’s responsibilities in handling cases such as this?

The University of Ottawa found itself in an extremely difficult place. Their ultimate decision to suspend the entire team has provoked a defamation lawsuit of $6M by the non-implicated players, but the risk of doing nothing and appearing nonchalant towards victims of alleged sexual assault in today’s climate might have had even more severe consequences for the University.

Over the past few years, allegations of sexual assault against university athletes have been reported in a steady stream, and in some cases, the accused are walking away unscathed. In a case against three members of McGill University’s football team in 2012, for example, the players in question were allowed to remain on the team and play while they awaited trial for their rape charges of a female student. A similar situation at Boston University in 2009 saw multiple players get away with non-consensual sexual acts because the university didn’t have proper policies in place to reprimand the team and not enough evidence to take the case to the police.

While criminal acts are dealt with by the courts, a university or sport organization has every right to protect its name and reputation by ceasing the operation of a program in which its employees – or in this case, players – are engaged in conduct that does not fulfill the values or personal expectations outlined by the organization. In order to avoid future confusion, however, all Canadian colleges and universities should re-evaluate the terms of the written agreement used with players, and where needed, clarify behaviour expectations and the policies outlining disciplinary action. It may be valuable as well to establish connections with local police authorities or legal counsel so that they may be able to help advise in the development of these new policies.

In a serious situation of athlete misconduct, it is important to allow the proper authorities to do their job where needed, but it is also important for institutions to respond on their own, keeping in mind that every decision is a message to both athletes and to the public. Think: What kind of statement does this make about the institution’s values and priorities? The lines can be blurry, but implementing new policies in preparation for the storms ahead can provide much clarity.

For the record, as an avid lover of all sports and a former competitor myself, I recognize that jocks often get a bad rap. I also recognize, however, that athletes often end up in a social class all their own as a result of their athletic abilities and this is where entitlement often starts. There is a serious cultural problem with the idea that stickhandling or swinging a bat or [insert athletic ability here] justifies a ‘get out of jail free’ card.

Universities must do their part to hold athletes accountable to a publicly acceptable standard. This means implementing specific conduct policies, addressing problems proactively, and most importantly, refusing to do nothing.

Jessica Geense is a recent graduate of Brock University's Sport Management program. Editorial assistance for this article was provided by Rachel Corbett of the Sport Law & Strategy Group and Brock University.