You are here: Home / Special Report / 41-3: The Judiciary / The Appointment of Justice Rowe
Reading Time: 8 minutes 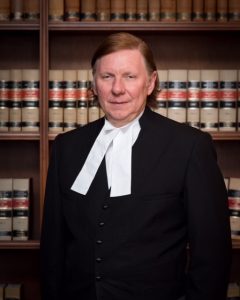 The first section of this article describes the recent changes to the Supreme Court appointment process, as Justice Rowe is the first nomination under the new process. The second section reviews Justice Rowe’s application for the position. The third discusses the public hearing, which I attended in Ottawa on 25 October 2016.

The question and answer session seems to be relevant to the Supreme Court Justice selection process primarily as it builds confidence in the nominee prior to their official appointment to the Court.The Supreme Court Act, RSC 1985, c S-26, s 4(2) gives the power to appoint Supreme Court justices to the Governor-in-Council but does not describe any process for how to do so. Prior to 2004, any consultation that took place was confidential and informal. A new process was adopted by the Liberal government in 2004 that was ad hoc and quickly organized. The 2004 committee had only one day’s notice as to who the two nominees were before speaking to them, and no part in the selection process. This process resulted in the appointment of Justices Abella and Charron to the Supreme Court.

The 2005 committee – also struck by the Liberals – participated in the selection process by narrowing the short list of six names (chosen by the Minister) down to three names. The committee included representatives of each political party. The Liberals were defeated in an election before completing the process and the Conservatives completed the nomination process. This was the first year that there was a public interview process between parliamentarians and the nominee, and it led to the appointment of Justice Rothstein in 2006. In 2008 the Conservatives were in power, and a vacancy occurred during an election, so no selection process or hearing was applied when Justice Cromwell was appointed. The process has been inconsistent in recent years – both Justice Gascon and Justice Côté were appointed in 2014 without any public hearings and the same was true of Justice Brown’s appointment in 2015.

..so unless something was discovered about Justice Rowe during the session that would give Prime Minister Trudeau some reason to reconsider his selection, Justice Rowe could expect to be appointed to the Court. I won’t keep you in suspense, nothing of the sort came up.The new process was announced August 2nd, 2016. First, an independent advisory board was established. The Prime Minister appointed The Right Honourable Kim Campbell as chairperson and two other members to the board (with two of the Prime Minister’s nominees being non-lawyers). Four independent professional organizations: the Canadian Judicial Council; the Canadian Bar Association; the Federation of Law Societies of Canada; and the Council of Canadian Law Deans were invited to nominate a member each. There was a notable effort to de-politicize the advisory board. Unlike previous committees used to select Supreme Court justices, the board includes no sitting members of Parliament or the Senate.

From August 2nd to August 24th the board accepted applications from judges and lawyers who met the requirements of the Supreme Court Act and who were functionally bilingual. The board was also mandated to seek out qualified applicants to encourage them to apply. It then created a short list of applicants that it presented to the cabinet, and, following a consultation period between the Minister of Justice, the Chief Justice of the Supreme Court, and other stakeholders, made recommendations to the Prime Minister. The Prime Minister then selected Justice Rowe as the nominee, although the short list was not binding on the discretion of the Prime Minister.

The new process is not entrenched in law – there is still nothing that compels Prime Ministers selecting Supreme Court Justices in the future to follow this procedure.

Some Comments on the Application of Justice Rowe

Questions on the development of Aboriginal rights in Canadian law brought out some of Justice Rowe’s most interesting answers.Although there is a convention to have one Justice from Atlantic Canada on the Supreme Court, the government said that it would not necessarily follow this tradition. This caused a bit of an uproar in the Atlantic Provinces. While Trudeau’s government did not officially back down from its position, it did ultimately select a judge from an Atlantic Province – Justice Rowe is actually the first Supreme Court Justice from Newfoundland and Labrador.

Some portions of the application document submitted by Justice Rowe are available on-line, and they make for interesting reading. The application included a questionnaire that asked for five examples of writing demonstrating the legal reasoning and writing of the applicant.

The final section asks about “reconciliation of the need to provide guidance on legal questions of importance to the legal system as a whole with the specific facts of a case which might appear to lead to an unjust result for a party?” Justice Rowe’s reply is a good example of answering a question in a manner those with legal training would likely consider ‘judicious’ and those without such training would probably describe as ‘self-contradictory’ or at least confusing:

“The Supreme Court maintains and develops the structure of law in Canada. Stability and predictability are important to maintain that structure. But, adaptation to changes in society, including changes in shared goals, is critical to the law’s development. It is important to operate from first principles, while also considering practical results. It is no less important to eschew ideological positions. Should the Court lead or mirror a shared sense of justice? The answer is, of course, both. Generally, it should lead when the time is ripe to do so, having regard to the needs and aspirations of Canadians.”

The Question and Answer Session

I had the pleasure of being one of the law students selected to attend the Question and Answer session. Each questioner had a fixed five minutes to ask questions and receive answers, meaning that no more than two questions could be effectively asked and answered. The Parliamentarians had no ability to block the Prime Minister’s selection– so unless something was discovered about Justice Rowe during the session that would give Prime Minister Trudeau some reason to reconsider his selection, Justice Rowe could expect to be appointed to the Court. I won’t keep you in suspense, nothing of the sort came up. The session lived up to the description given to it by moderator and law professor Daniel Jutras: “a chance to glimpse into the mind of a great jurist.”

In addition to the absence of decision-making authority by the questioners, the question and answer session had another constraint: Justice Rowe could not be asked to answer any questions that may come before the courts, to explain his reasoning on past judgments he has made, or to describe his position on past Supreme Court decisions. It would damage judicial independence and the finality of judgments to allow a Supreme Court nominee to commit themselves to any such positions. This limitation made the forming of questions a considerable challenge – the most obvious questions could not be asked. The inquirers tried to skirt the rule in a number of ways: using hypotheticals (which were thinly veiled attempts to ask about future potential cases), and attempts to describe the ‘process’ of making a past judgment – which is not always distinct from elaborating on the reasons given. At times it seemed the more challenging part of the session was to be on the asking end.

I had the pleasure of being one of the law students selected to attend the Question and Answer session.The structuring of questions seemed to require walking a fine line. No question could refer to a specific case; for example a question about a sexual assault case currently before the Supreme Court on which Justice Rowe heard the appeal. A question that was too general received an impeccably correct but non-specific answer that could have been obtained by consulting a law textbook. Notwithstanding these challenges, some of the questions led to interesting answers.

The new process is not entrenched in law – there is still nothing that compels Prime Ministers selecting Supreme Court Justices in the future to follow this procedure.Two questioners asked Justice Rowe about a claim from his application that “Through the leave to appeal process, the Court chooses areas of the law in which it wishes to make a definitive statement. Thus, the Supreme Court judges ordinarily make law, rather than simply applying it.” Justice Rowe’s answer was a clear and rapid introduction to the role of courts in Canadian law. The role of the courts is to interpret statutes in accord with the intention of Parliament, and Parliament is free to rewrite statutes where it feels the court has misinterpreted them. The interpretation of the Charter is different – it involves the protection of rights given to Canadians from legislatures. Both of these interpretive tasks effectively involve creating new law to answer novel questions. It was odd to see legislators appear to take issue with a statement that seemed like little more than a factual description of the work of the courts.

There is an interesting relationship between the courts, particularly the Supreme Court of Canada and governments and indigenous leadership in terms of how much the Court says and when it says it. I think it would be unwise for the Court to get out ahead of a process which I truly hope will be a process of reconciliation…which will come through nation to nation dealings. And in a sense the Court should stand a little apart from that, always, always, bearing in mind that if a First Nation or some group of Indigenous persons wishes to vindicate their rights before the court they have a right to be heard and to receive a remedy where that is warranted…

There was a notable effort to de-politicize the advisory board. Unlike previous committees used to select Supreme Court justices, the board includes no sitting members of Parliament or the Senate.The new process is not entrenched in law – there is still nothing that compels Prime Ministers selecting Supreme Court Justices in the future to follow this procedure.The questions brought out some other interesting odds and ends. Justice Rowe spoke in favour of clarity in Supreme Court judgments – especially in the portion of the judgment intended to be a definitive statement of law. He indicated that government references to the Supreme  Court involve “existential questions” and that he is “in a sense, relieved that [he] will never be called upon to frame” such questions. He also gave a succinct answer describing the role of a judge “to do right according to law”, and stated that his favourite past Supreme Court Justice was Justice Sopinka, who was appointed to the Court directly from practice.

In general, I believe the major function of the question and answer session was to effectively inspire confidence in Justice Rowe. While the session in part reflected what Justice Rowe had written in his application, his demonstration of his ability to think quickly and articulate himself (in both French and English) on a variety of legal matters while keeping in mind the restrictions on what he could say, was not a small feat. The question and answer session seems to be relevant to the Supreme Court Justice selection process primarily as it builds confidence in the nominee prior to their official appointment to the Court. As for the appointment process itself, as I noted above it is not entrenched in law and thus there is no assurance this process will be followed next time.

Drew Yewchuk is a research assistant and articling student at the Public Interest Legal Clinic at the University of Calgary.