You are here: Home / Feature Articles / 37-3: Constitutions / The Constitutions of the Maritime Provinces
Reading Time: 6 minutes 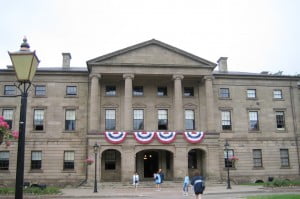 The oldest of these pre-confederation constitutions belong to the Maritime provinces: Nova Scotia, New Brunswick and Prince Edward Island. This is no accident. History is the mother of the law, and in the constitutional context, the earliest settled (or conquered) colonies were vested by the British Crown with the earliest constitutions.

The BNA Act, 1867, section 146, contemplated the addition of other British North American colonies to the Dominion of Canada as provinces, after Confederation, by way of order-in-council. It was pursuant to this section that Prince Edward Island was admitted to Canada as a province by Imperial Order-in-Council in 1873. In terms similar to those used in the BNA Act for the other provinces, and to like effect, the Order continued the “constitution of the executive authority and of the legislature of Prince Edward Island”, as existing at the time of the Union; subject to the BNA Act, 1867, and until altered under the authority of that Act.

Therefore, to appreciate the constitutional structure of the present-day Maritime provinces, it is necessary to delve into the question of how these former colonies acquired their constitutions, and what these constitutional provisions were.

The constitutions of the Maritime provinces were established through the royal prerogative – the executive power vested by the common law to the Crown. Under this prerogative the Crown, outside of Parliament, could legislate to establish the instruments of government for British colonies, in certain circumstances.

The source of these early colonial constitutions made their form unique. The constitutions for the Maritime colonies did not exist by way of formal charter or single, written constitutional document. Rather, they consisted of prerogative instruments issued through the executive power of the Crown. The following general description of the Nova Scotia Constitution, by a former Lieutenant Governor, is equally applicable to describe those of New Brunswick and P.E.I:

“No formal charter or constitution ever was conferred, either on the province of Nova Scotia or upon Cape Breton while that island was a separate province. The constitution of Nova Scotia has always been considered as derived from the terms of the Royal commissions to the Governors and Lieutenant-Governors, and from the “instructions” which accompanied the same, moulded from time to time by despatches from Secretaries of State, conveying the will of the Sovereign, and by Acts of the local legislature, assented to by the Crown; the whole to some extent interpreted by uniform usage and custom in the colony.”

The substance of the Maritime constitutions followed their form, with those of New Brunswick and Prince Edward Island closely tracking the provisions of the Nova Scotia Constitution.

As with most Canadian constitutional developments, Nova Scotia holds the founding position in constitution-making. Nova Scotia is the oldest of the British North American colonies that would eventually form Canada, and has the country’s oldest constitution.

The Commission of Edward Cornwallis, by letters patent dated May 6, 1749, called for the appointment of the Governor, and gave him authority to appoint an Executive Council to advise the Governor in colonial matters. As noted by J.E. Read in “The Early Provincial Constitutions”, 1948 Can. Bar Review 621, at p.626, this Council served not only as an executive council, but also in the capacity of a Legislative Council – a second chamber of the Legislature; and the “Principal Court of Judicature”.

On the legislative front, Cornwallis’s Commission granted the Governor the authority, with the advice and consent of the Council, to summon a General Assembly of the “freeholders and planters within your government according to the usage of the rest of Our colonies and Plantations in America.” The Governor, with the advice and consent of the Council and Assembly, was given the full power and authority to “make, constitute and ordain Laws, Statutes and Ordinances for the Publick peace, welfare of our said province and of the people and inhabitants thereof.” Through this latter provision, legislative authority for Nova Scotia was vested in the Governor, the Legislative Council, and General Assembly. However, so that “nothing may be passed or done by our said council or assembly to the prejudice of us (the Crown), our heirs and successors”, the Governor was given a general veto power over any laws so passed.

The terms of the 1749 Commission required the Governor to comply with its provisions, and to govern according to the Instructions therewith, or thereafter given. In the Instructions dated April 29, 1749 the Governor was ordered, among other things, to establish a Principal Court of Judicature, in the form of a General Court consisting of the Governor and his Council; and inferior courts with a right of appeal to the General Court. The 1749 Instructions further provided that the Governor take care to ensure the speedy and impartial administration of justice in the courts, and the preservation of the legal rights and property of subjects of the province through the writ of habeas corpus.

The Commission and Instructions to Governor Patterson in Prince Edward Island, and those to Governor Carleton in New Brunswick, were patterned on the Nova Scotia model. The result was that the constitutions for both P.E.I and New Brunswick provided for an Executive Council to advise the Governor, a Legislative Council and a general elective assembly.

In P.E.I, the constitutional instructions stipulated that the province’s judicial institutions were to be based on the Nova Scotia model. However, the summoning of an assembly required the calling of a Council Assembly, rather than a General Assembly like in Nova Scotia. (J.E. Read, “The Early Provincial Constitutions”, p.630) Consequently, in1773, an appointed Legislative Council was joined with the elected House of Assembly in P.E.I, to form a bi-cameral legislature.

Changes to the Maritime Constitutions through the BNA Act 1867

The colonial constitutions of Nova Scotia, New Brunswick and P.E.I were continued after their admission to the Canadian union, subject to the provisions of the BNA Act, 1867. For all three, this meant a change in the way the executive head of the province was appointed (the Lieutenant- Governor appointed by Governor General, s. 58), and a curtailment of the legislative powers of the provincial assemblies through the division of powers in sections 91 and 92 of the BNA Act, 1867.

Furthermore, section 92 of the BNA Act allows the legislature of each province to make laws that amend the constitutions of each province. The Maritime legislatures have taken advantage of this provision to abolish the Legislative Council in each of their respective provinces.

Clement, W.H.P, The Law of the Canadian Constitution (Toronto: The Carswell Company Ltd., 1916)