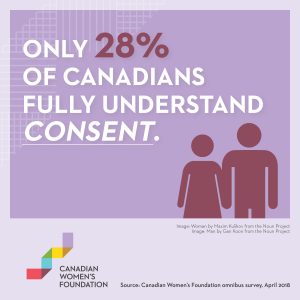 If you had to define what constitutes consent in sexual situations, what would you say? Is it something you could explain to your children?

If you’re feeling awkward or hesitating, you’re not alone. And even if you think you know how to define consent, our latest survey at the Canadian Women’s Foundation, which was part of the Foundation’s annual Campaign to End Violence, will challenge your assumptions.

The #MeToo Movement is far from over, and the important conversations it started need to evolve, for the sake of our children and future generations.

While the #MeToo movement has prompted unprecedented conversation around the prevalence of sexual harassment and assault, this survey underlines the urgent need to focus on prevention and education.

The survey’s question about defining consent asked respondents to choose which factors are needed to ensure sexual activity is consensual. Only 28 per cent — shockingly 5 per cent less than a 2015 Foundation report — recognized that consent should be:

Although the terms verbal, behavioural and ongoing are in line with Canada’s legal definition of consent, myths and confusion endure.

We need to recognize consent as a safety issue that everyone has a stake inFor example, some might believe that if one partner doesn’t actually say “no,” or is silent, there is consent. But sexual situations that cross the line into assault can lead to a range of verbal and non-verbal reactions. Someone who is experiencing sexual assault may involuntarily freeze in response to what they’re experiencing, and not be able to communicate their refusal.

Given that sexual assault is often committed by someone a woman knows, in the moment she may feel a sense of disbelief or paralysis that someone she cares about is hurting her. Women’s socialization around “being nice” when it comes to conflict may also make it more difficult to speak up.

These are just a few reasons why an ongoing two-way exchange is so important. In recent years, many sex educators have been promoting the notion of enthusiastic consent, emphasizing that rather than focusing on “No means no,” sexual partners should focus on “Yes means yes” as a more proactive way of gauging consent.

The crucial need for stronger education around consent is underlined by the fact that 50 per cent of women in Canada have felt pressured to consent to unwanted sexual activity, according to the survey. Of those women, 55 per cent of those between the age of 18 to 34 said they experienced pressure to consent.

There will be those who think we can’t change our behaviour around consent; that there will always be some uncertainty in sexual situations. People will joke about needing to have legal documents on hand during dates. But we need to recognize consent as a safety issue that everyone has a stake in.

These programs need to be accessible to every young person across Canada.We’ve changed how we approach so many other safety issues: wearing seatbelts in cars, not drinking and driving, practising safe sex by using condoms. So, why not consent? Given the social and economic costs of sexual assault and other sexual offences in Canada (an estimated $4.8 billion in 2009), as well as the potential legal consequences of not understanding it, surely, it’s worth our time and attention.

The good news is that the Foundation’s survey revealed that Canadians of all genders want more clarity around consent. When asked what they see as the most important next step to take in the wake of the #MeToo movement, 44 per cent of Canadians said that it’s educating people about how to get and give consent.

So, how do we do that? At the Canadian Women’s Foundation, it starts with youth. We fund programs across Canada that help teens understand consent, identify the warning signs of abuse and cultivate positive, healthy relationships.

Paulette Senior is CEO and President of the Canadian Women’s Foundation.