A Website of The Centre for Public Legal Education Alberta
You are here: Home / Feature Articles / 41-6: The "Reasonables" / The Reasonable Person
Reading Time: 7 minutes 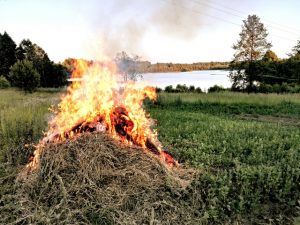 Tort law is an umbrella field of law, which aims to correct injustices that have happened between individuals. The courts assess whether the victim, who is often the plaintiff, has been harmed by another person and if the victim is entitled to compensation for injuries suffered. Where the harm has occurred unintentionally or due to carelessness, the court will apply the reasonable person standard.

Canada inherited the reasonable person standard from England in Vaughn v. Menlove, 1837 132 ER 490.  In this case, an individual of “lower intelligence” (as noted in the case) built a shoddy haystack too close to the plaintiff’s land. The defendant was warned that the haystack was poorly constructed, but ignored this advice. Unfortunately, the haystack spontaneously combusted and destroyed some of the plaintiff’s property.

The court rejected the defendant’s argument that he had acted honestly and in good faith even though he built a shoddy haystack. The court also rejected the idea that imposing liability on the defendant would unfairly punish him because of his lower intelligence. Instead, the court found the defendant liable and stated that the defendant must “adhere to the rule which requires in all cases a regard to caution such as a man of ordinary prudence would observe”. This is the basis of the reasonable personal standard. Characteristics of a reasonable person standard  include:

What Do the Courts Look at To Determine Reasonableness?

Judges make many assessments to determine the reasonableness of the behaviour in question and whether the defendant was negligent.   According to the Supreme Court of Canada (SCC), “what is reasonable depends on the facts of each case, including the likelihood of a known or foreseeable harm, the gravity of that harm, and the burden or cost which would be incurred to prevent the injury.  In addition, one may look to external indicators of reasonable conduct, such as custom, industry practice, and statutory or regulatory standards” (Ryan v. Victoria (City), [1999] 1 SCR 201).

According to the Supreme Court of Canada (SCC), “what is reasonable depends on the facts of each case, including the likelihood of a known or foreseeable harm, the gravity of that harm, and the burden or cost which would be incurred to prevent the injury.  In addition, one may look to external indicators of reasonable conduct, such as custom, industry practice, and statutory or regulatory standards” (Ryan v. Victoria (City), [1999] 1 SCR 201).

According to the courts, a reasonable person carefully avoids creating a foreseeable risk of injury to others. In Moule v. New Brunswick Electric Power Commission, (1960) 24 DLR (2d) 305 (SCC), the defendant power company removed branches of trees to be able to install high voltage wires on telephone poles in a wooded neighbourhood. A 10-year-old climbed up the tree and fell out. During his fall, he reached out and touched the live wires. The court found that children climbing trees and coming into contact with closely hung live wires was a foreseeable risk that power companies should address by making the wires visible. However, because the power company placed the wires above ground and removed the tree branches, the court found that the power company took adequate precaution. In doing so, the court held: “The defendant should not be held guilty of negligence for not having foreseen the possibility of the occurrence of such an unlikely event as happened in this case and provided against it by the removal of the maple tree.”

These cases demonstrate that reasonably foreseeable risk is an essential component of liability and context is important in determining if negligence occurred.

Likelihood and Severity of Damage

A reasonable person takes greater care when the likelihood and/or severity of damage are strong and less care when the likelihood and/or severity of damage are minimal. Bolton v. Stone, a 1951 United Kingdom case is still a leading decision on this and other points. In Bolton, a person was hit on the head with a cricket ball while standing on a highway adjoining a cricket ground. This cricket ground had been used for 90 years at the time of the case. The Court noted that in the previous six years, the ball had only been hit onto the highway six times and no one had ever been injured. The court found that the cricket club did not breach the reasonable person standard because the risk of damage was so small. The court stated that: “[i]n order that the act may be negligent there must be not only a reasonable possibility of its happening, but also of injury being caused.”

Courts consider the cost of preventing a liability in determining negligence. In Wilde v. The Cambie Malone Corporation, 2008 BCSC 704, a woman was hit on the head by a restaurant’s patio umbrella that was blown toward her by the wind. The court found the restaurant negligent because it was foreseeable, given its location right by the water, that a powerful gust of wind could lift away the umbrella, even though this had never happened before. Moreover, the court considered that it would cost very little to set up an inspection checklist and repair system for the employees putting up the umbrellas. Therefore, the restaurant did not sufficiently safeguard the plaintiff from harm.  This decision highlights the need to balance the likelihood of damage with the consideration of cost measures needed to reduce or neutralize the risk.

Public Benefits A person must exercise the standard of care that would be expected of an ordinary, reasonable and prudent person in the same circumstances to avoid liability;

Often, in cases where governmental services are provided, courts consider that an increased risk of injury to an innocent person is justifiable if the services provide direct and necessary benefits to the public. For example, in Priestman v. Colangelo, [1959] SCR 615, a police officer who was involved in a high speed chase was sued for shooting the suspect. When shot, the suspect was rendered unconscious and his car hopped onto a curb and killed two pedestrians. The court determined that the police officer was not liable for the death of the pedestrians, because he was empowered to take certain risks in his line of duty.

Exceptions to the Reasonable Person Standard

The justice system has recognized that there are certain characteristics that either exempt groups of people from liability or place stricter liability on them.

If a defendant’s mental abilities render the actions involuntary or prevent a person from complying with the normal standard of care, then there may be no liability in negligence.  In addition, a defendant may  be found not to have been negligent if they are suddenly afflicted, without warning, with a mental disability that renders them incapable of either:

This exemption will not apply to negligent behaviour due to voluntary intoxication.

Canada inherited the reasonable person standard from England in Vaughn v. Menlove, 1837 132 ER 490.  A two-stage test is applied to children in the rare cases that they are sued for negligence. The first stage analyzes whether the child is capable of negligence having regard to age, intelligence, experience and other personal factors. The second part considers if the child exercised the standard of care to be expected of a child of the same age, intelligence and experience. However, if the child engages in adult-like activity such as operating a sea-doo or powerboat, he/she will be held to the stricter reasonable person standard (Philip H. Osborne, The Law of Torts, 5th ed (Toronto: Irwin Law, 2015 at 47 [Irwin])).

A specific  standard of care is applied to a person with a physical disability. However, even this exception is limited. For example, the standard applies if a person is blind, deaf or a paraplegic. The standard does not apply if a person is short-sighted, poorly co-ordinated, slow, elderly, or arthritic. Individuals with physical disabilities must take care to mitigate their  vulnerabilities. In Ryall v. Alsa Road Construction Ltd., 2004 ABPC 101, a construction company was sued by a visually impaired jogger who fell over a wooden barrier warning sign while running prior to sunrise. The court found that the construction company was not liable because the jogger withheld disclosure of her physical impairment at trial and did not see a doctor until an infection had already set in.

Those with superior skill and knowledge, such as doctors, lawyers, architects, engineers and police officers,  are held to a higher standard taking into account their expertise. (Wilson v. Swanson, [1956] SCR 804). They are judged based on the average or general skills or knowledge of their particular group.  For example, a lawyer will be held to the standard of a reasonably competent lawyer (Central Trust Co. v. Rafuse, [1986] 2 SCR 147) and police officers are held to the standard of a reasonable police officer (Hill v. Hamilton-Wentworth Regional Police Services Board, [2007] 3 SCR 129). Behaviour that is consistent with established practices in a person’s profession is less likely to be seen as negligent (ter Neuzen v. Korn, [1995] 3 SCR 674). Note, however, there are no separate standards of care for beginners.  They are expected to act according to the same standard as a reasonable professional in their field.

Subjectivity gives rise to inconsistency which is not desirable in administering justice. One way that subjectivity may be introduced in the justice system is through judges. Judges have an innate sense of fairness or may show an instinctive response to facts of a case which may influence a judge to apply a certain degree of conscious or unconscious subjectivity (Irwin at 41). Sometimes, a judge’s preconceived notions can result in errant subjectivity. In a highly publicized sexual assault case, former Justice Robin Camp made comments that implied that the sexual assault could have been prevented by the victim and advocated other rape myths. Generally, the justice system attempts to address issues of judicial subjectivity by providing special training and professional development to judges. In former Justice Camp’s case, however, a disciplinary panel found that his comments deserved dismissal and he subsequently resigned.

Where the harm has occurred unintentionally or due to carelessness, the court will apply the reasonable person standard.  Subjectivity can also be introduced through hindsight bias. Psychological studies have shown that people tend to overstate the predictability of past events (Irwin at 42). When judges or juries are asked to assess the risk that a reasonable person would have foreseen at the time of  an accident and how s/he should have acted, they are already aware that the defendant’s assessments may have been inadequate. This may result in assessing reasonableness on a stricter basis (Irwin at 42). Except in very limited circumstances, the subjectivity introduced by judges and hindsight bias may be difficult to identify.

A review of the reasonable standard reveals its dependence on the facts of the situation. Therefore, reliance on a judge or jury’s interpretation of facts and application of an objective standard of care is sometimes problematic. Still, in a world where rights and wrongs swim in a sea of greys, the reasonable person standard is the best we have to balance consistency in the law with the nuances of life.