You are here: Home / Special Report / 44-6: Home Works / The Right to Housing as a Human Right
Reading Time: 6 minutes

International human rights law acknowledges everyone’s right to an adequate standard of living, which includes the right to adequate housing. 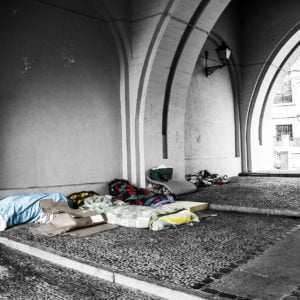 Many international legal instruments protect the right to adequate housing, including:

The international community affirmed the right of every individual to adequate housing at the World Conference on Human Rights in Vienna in 1993.

The Committee on Economic, Social and Cultural Rights defined adequate housing as:

Human rights are interdependent, indivisible and interrelated. That means the right to adequate housing cannot be separated from other rights, such as the rights to health, work, vote, privacy, education, sanitation, etc. When people relocate due to a forced eviction, they might not be able to find a job and make a living. Homeless people, who cannot show or prove their residency, may not be able to vote, benefit from social services or get health care. In addition, inadequate housing may lead to health issues if there is limited or no safe drinking water and sanitation.

Moreover, the absence of decent and secure accommodation can affect children, who are vulnerable and need care and protection. Without adequate housing, children may be mistreated and neglected and may grow up in an environment that lacks moral and material security. Also, children who do not have appropriate housing may not be able to register in schools.

“A lot of people don’t look at housing as a human right, but it is,” said former US President Jimmy Carter. He added:

To have a decent place to live is a basic human right. Also, to have a chance to live in peace and to have adequate health care and adequate education, so you can take advantage of your talents… I don’t see how a family can enjoy other human rights like freedom of expression, freedom of speech, freedom of religion, the right to vote, if they live in a disreputable place of which they are ashamed and makes their family lower their standard of ethical and moral values.

However, and according to a United Nations report, despite governments committing to protect the right to adequate housing, that does not mean that these governments must “construct a nation’s entire housing stock”. The report continues:

Rather, the right to adequate housing covers measures that are needed to prevent homelessness, prohibit forced evictions, address discrimination, focus on the most vulnerable and marginalized groups, ensure security of tenure to all, and guarantee that everyone’s housing is adequate.

The UN Special Rapporteur, appointed by the United Nations in 1992, further confirmed:

[T]he human right to adequate housing did not require the State to build housing for the entire population or to provide housing free of charge. It certainly did demand that the State undertake a series of measures indicating policy and legislative recognition of each of the constituent aspects of that right. Countries must not misinterpret and abrogate their responsibility, particularly in relation to highly disadvantaged groups such as the homeless.

“Housing rights are human rights and everyone deserves a safe and affordable place to call home… and one person on the streets in Canada is too many,” stated Prime Minister Justin Trudeau.

In Canada, the right to housing is not included in either The Constitution Act, 1867 or the Canadian Charter of Rights and Freedoms (the Charter). Also, Canadian provinces and territories do not protect housing in their laws. Provincial human rights codes protect only against housing discrimination and denial of housing, and sometimes against forced evictions. They also allow for special programs that prevent inequality, which may include housing programs.

Nevertheless, Canada has signed and ratified the International Covenant on Economic, Social, and Cultural Rights which, as mentioned earlier, recognizes adequate housing as a fundamental human right. Since Canadian legislation does not mention the right to adequate housing, courts have to rely on international legal instruments when interpreting and applying section 7 of the Charter (which guarantees the right to life, liberty and security of the person) and section 15 (which protects equality rights).

But Canadian courts did not acknowledge both rights. The Supreme Court of British Columbia recognized some negative housing rights, when the province had no adequate shelter available, in the following cases: Victoria (City) v Adams, 2009 BCCA 563, Abbotsford (City) v Shantz, 2015 BCSC 1909, British Columbia v Adamson, 2016 BCSC 584 and British Columbia v Adamson, 2016 BCSC 1245. However, in obiter (a ruling not required for the outcome) the Ontario Court of Appeal in Tanudjaja v Canada (Attorney General), 2014 ONCA 852 ruled that section 7 does not create positive rights to guarantee adequate living standards.

In April 2018, the government released the country’s first National Housing Strategy in order to implement Canada’s obligation under international human rights law. However, as it was originally introduced, the National Housing Strategy Act did not have necessary elements of a practical human rights structure, especially in terms of accountability. Thus, amendments were needed to ensure that the government could achieve its aim of recognizing housing as a human right, and to guarantee that it could set up methods to protect this right.

In April 2019, and after making some amendments, the government introduced the National Housing Strategy Act in the Budget Implementation Act (which the Governor General approved in June 2019). This Act requires the government to “further the progressive realization of the right to adequate housing” as recognized by international human rights laws.

Section 4 of this Act reads:

(a) recognize that the right to adequate housing is a fundamental human right affirmed in international law;

(b) recognize that housing is essential to the inherent dignity and well-being of the person and to building sustainable and inclusive communities;

(c) support improved housing outcomes for the people of Canada; and

(d) further the progressive realization of the right to adequate housing as recognized in the International Covenant on Economic, Social and Cultural Rights.

The UN Rapporteur on the right to housing, Leilani Farha, has commented:

With just over a decade before the Sustainable Development Goals are to be achieved, the Government of Canada has shifted its approach to the right to housing to one that recognizes housing as a fundamental human right essential to the inherent dignity and well-being of the person.

Canada’s new model contains the hallmarks of a human rights approach. Not only does it include a legislated right to housing, it also establishes in law creative mechanisms to monitor and hold the Government accountable and ensure access to remedies to address systemic barriers to the enjoyment of adequate housing. This model can serve as an example for countries all over the world.

However, Farha stated that despite Canada’s global standing as a top ten performing economy, there are at least 235,000 homeless people and 1.34 million households in core housing need, with acute affordability problems in several cities.

Human rights are interdependent, indivisible and interrelated. It is important to note that we do not know what legal consequences this Act will have. We just have to wait and see how the courts will interpret and implement it. This will take some time. Also, this Act is not included in the Constitution. This means any future government could revoke it, as there are no limits preventing a government from doing so.

The right to housing is a human right that is critical to a person’s health, dignity, safety, inclusion and contribution to their community. Without appropriate housing, it is hard to get or keep a job, have access to health care, have proper sanitation, recover from mental illnesses and get children into schools.