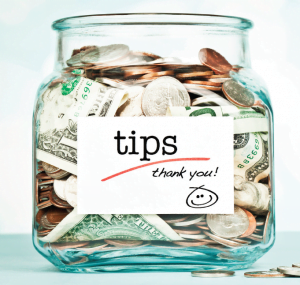 In 2012, Statistics Canada estimated the total underground economy in Canada to be $42.4 billion. What comprises this significant amount? It has been a very popular and strong focus in recent years to attribute this activity to high net worth individuals, business owners and offshore tax evasion. However, it is not simply these individuals and businesses that are responsible. Individuals at all income levels, from every walk of life, contribute to these unreported, untaxed amounts.

Some restaurateurs also report having received calls from CRA enquiring about the manner in which they handle gratuities.For example, 12% of the total underground economy activity can be found in the accommodation and food services industry. How does this happen? A significant contributor would be unreported tips and gratuities – those gifts provided to servers for a job well done. Many people in service industries (e.g. restaurant servers, taxi drivers, and hairdressers) receive gratuities, often not reflected on a T4 (Statement of Remuneration Paid) or similar information slip, and it is widely believed that much of this income goes unreported.

In this article we will focus on both the employee and employer responsibilities with respect to tips and gratuities, as well as possible penalties that may arise from unreported amounts and means to rectify failings to report income in prior years.

All amounts received by virtue of an individual’s employment, barring an exception, are taxable. This includes not only salaries, wages and bonuses, but any benefit received by virtue of employment. CRA discusses an array of benefits in its publication T4130, Employer’s Guide to Taxable Benefits and Allowances. Allowances, for example, are generally taxable. One area of recent CRA activity in this regard is automobile allowances, which are taxable unless they are both reasonable in amount and based solely on distance travelled for employment purposes.

Failure to withhold CPP/EI can result in being assessed both the employee and the employer’s contributions. Penalties of up to 20% of the unremitted amounts are commonly applied.Employment benefits received from persons other than the employer, such as tips and gratuities, fall into this wide net. In some cases, an employer will include tips paid to an employee on the individual’s T4 slip, possibly withholding Canada Pension Plan (CPP) and Employment Insurance (EI) premiums, and taxes. Employees should carefully consider whether all tips received were properly reported in the T4. Amounts not included on the T4 must still be reported.

In other cases, the tips will not be reported on a T4 slip, or any other document. In this case, the individual should independently track all tips received and report them separately on their tax return, as other employment income (on line 104).

Though it is common practice in the service industry for individuals to receive tips, an employer’s responsibilities with respect to these tips is not nearly as well understood and can be very costly.

Under CRA’s current interpretation of the law, the employer must determine whether the tips are:

However, a recent Tax Court of Canada decision (Andrew Peller Limited vs. Minister of National Revenue) suggests that CRA may be incorrect on this matter. While CRA policy states that businesses must look at who controls the tips, the Court noted that the actual test would be whether it was the employer who paid out the tips. CPP and EI, as well as T4 reporting, would be required in all situations where the employer handled the cash – this is sufficient to “pay” the gratuities. Given the prevalence of debit and credit cards, this would mean most tips are subject to CPP and EI, and employer reporting. This case has recently been appealed.

A tip that is freely given on a bill is not subject to GST/HST. However, if the business adds a mandatory or suggested amount to the bill as a service charge, the amount is subject to GST/HST. The same rule applies whether the tip is paid through the business to employees, or is paid to a self-employed person, such as a hairdresser or taxi driver.

Failure to report income, even if it is not included on the T4, exposes an employee to costly penalties and interest. Where an individual fails to report an amount of income, for example for 2015, and also failed to report an amount in any of the prior three years (2012, 2013, or 2014), the penalty levied is generally 20% of the unreported income. Alternatively, CRA can assess gross negligence penalties, being 50% of the understated tax. Proposed legislation will cap any penalty at this 50% amount. CRA commonly reviews multiple years at once, so the additional tax, interest and penalties can add up very quickly.

A tip that is freely given on a bill is not subject to GST/HST. However, if the business adds a mandatory or suggested amount to the bill as a service charge, the amount is subject to GST/HST Employers failing to properly comply with the above rules can also be subject to an expensive bill. Failure to withhold CPP/EI can result in being assessed both the employee and the employer’s contributions. Penalties of up to 20% of the unremitted amounts are commonly applied. If the business is not able to pay these amounts, the directors of the corporation may be personally liable for the amounts. Inaccurate or incomplete T4 slips can also attract penalties and, again, CRA tends to assess multiple years.

Where a taxpayer comes forward voluntarily to correct errors and omissions in their tax filings, they can apply under the VDP. Eligibility for the program requires that the disclosure must be voluntary, including being made before the individual is aware of any action taken by CRA. For example, if the taxpayer’s employer is being reviewed for unreported tips, it is likely too late for the taxpayer to initiate a voluntary disclosure with respect to unreported gratuities. In addition, the information provided to CRA must be complete (possibly including many years). Other requirements also apply.

If the disclosure is accepted under the VDP, all penalties (and, in the extreme, criminal charges) would be waived, so the taxpayer would only pay the taxes and interest. This program is not unique to tips – any income tax and GST/HST matters can be disclosed under this program.

Where are we Now?

History has demonstrated CRA’s interest in this type of unreported income and underground activity.

Though it is common practice in the service industry for individuals to receive tips, an employer’s responsibilities with respect to these tips is not nearly as well understood and can be very costly.For example, a review of 145 serving staff in St. Catherines, Ontario resulted in $1.7 million in unreported tips and gratuities, an average of nearly $12,000 per serving staff. A Canadian Press article in 2012 quoted CRA as indicating that “once the project has been thoroughly evaluated, the results and findings will enable the CRA to determine whether to expand it at a national level”.

On the employer side, the recent case discussed above (Andrew Peller Limited vs. M.N.R.) involved approximately $1 million in tips, in a restaurant with approximately $6.5 million in sales. In other words, this area is definitely on CRA’s radar. Some restaurateurs also report having received calls from CRA enquiring about the manner in which they handle gratuities.

With the federal government’s announcement in the 2016 Budget to spend an additional $444.4 million over five years to combat tax evasion and avoidance, both businesses and employees in the hospitality industries, and others where CRA perceives high underground activities should expect more scrutiny in the years to come.