A Website of The Centre for Public Legal Education Alberta
You are here: Home / Special Report / 36-6: Testing the Limits of the Law / What Ever Happened to… Jim Keegstra
Reading Time: 7 minutes 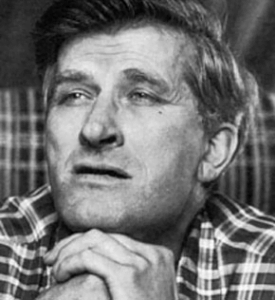 This is not my battle anymore. It’s the battle of everyone who loves freedom. Anyone who is against me is against freedom of speech.
– Jim Keegstra

Our law does not regulate expressions of desire or love. The same applies to the full range of other emotions such as rage, melancholy or euphoria. Even malicious lies and deceits largely pass without legal redress – and prosecutions where they can cause palpable harm – such as for misleading advertising and perjury are rare.

On the other hand, publicly stating anything that wilfully promotes hatred against any identifiable group can dispatch one to jail for two years with a criminal record. The issue of whether this crime unjustifiably limits our freedom of expression enshrined in the Canadian Charter of Rights and Freedoms would invariably reach the Supreme Court of Canada.

R. v. Keegstra was such a landmark freedom of expression case that aspects of this issue were considered in three separate trips to the Supreme Court of Canada between 1990 and 1996. In the end, a closely divided Court upheld the crime of promoting hatred as a reasonable limit on expression. However, the case also generated intense debate on free expression and whether we can, and should, realistically control hate speech.

Background of the Keegstra Case

In the summer of 1983, Canadians learned that a public high school social studies teacher in the small central Alberta town of Eckville had for years been teaching of a Jewish conspiracy to rule the world. In his class, he described Jews as “gutter rats” and “money thugs” who were simultaneously in control of capitalism, socialism and communism in a plot to destroy the Christian way of life. (To read more of this background, see Keegstra: The Issues, The Trial, The Consequences.) He described Jews as “treacherous,” “subversive,” “sadistic,” “money-loving,” “power hungry” and “child killers.” Jim Keegstra taught his students that Jews were to blame for historical calamities such as depressions, anarchy, wars, chaos and revolution. He did not advocate violence.

Keegstra had taught industrial arts, social studies, law, mathematics and science to both junior high and senior high classes at Eckville. He was well liked by students and staff, and he was regarded as an effective classroom manager and teacher.

Keegstra’s own brand of history was received with general complacency for about a decade. Despite rumours and some complaints over the years of what went on in Keegstra’s social studies class, little was done to investigate and discipline him. He was also the town’s mayor and an auto mechanic. It was not until a visit from a new school district superintendent in December 1981, in response to a complaint from a parent over the anti-Semitic content of his son’s essay, that the matter began to be taken more seriously. Keegstra was warned at that time to cease teaching the Jewish conspiracy as fact.

On December 7, 1982, Keegstra was terminated from his teaching position after he failed to comply with that directive. He then lost his membership in the Alberta Teachers Association and his 14-year teaching certificate was revoked.

Initial Reluctance for a Criminal Charge

Despite what some viewed as a troubling violation of public trust, law enforcement was reluctant to lay criminal charges. The hate speech law, section 281(2) [now section 319(2)] of the Criminal Code, was widely considered unenforceable. (See A Trust Betrayed: The Keegstra Affair.) No successful prosecutions under the law had been made since its inception in 1970. Now, a new Charter of Rights further strengthening the right of free expression had just been enacted.

Throughout the winter of 1983, the Keegstra matter received some publicity, but concerns were fading. It would have likely ended at the school board level if not for a rookie rural member of the Alberta Legislature being quoted in the press for also doubting the Holocaust, in April 1983. The re-ignited political controversy returned Keegstra to the spotlight and fresh evidence of what Keegstra had taught outraged the public and Alberta’s Attorney General. Political pressure to do something increased. Despite doubts about the robustness of the law, by the end of 1983 the Attorney General considered the case worth trying.

On January 11, 1984 Jim Keegstra was charged with criminally promoting hatred against an identifiable group by communicating statements while teaching social studies to students at Eckville High School from 1978 through 1982. Prior to trial, Keegstra applied to have the charge quashed on the grounds that the crime with which he was charged constituted a breach of his Charter freedom of expression.

The judge at his first trial in 1985 accepted none of these Charter objections. Keegstra was convicted by a jury and was fined $5000. Keegstra appealed the conviction. The Alberta Court of Appeal unanimously struck down the criminal charge under the Charter.

On further appeal to the Supreme Court of Canada, the crime was found to be constitutional by a four to three majority. All the judges agreed that the crime violated freedom of expression. However, the majority concluded that the law was justified as a reasonable limit on freedom of expression because hate speech might lead to psychological harm, degradation, humiliation and violence. The dissenting judges said the law went too far to trample expression. In the end, more judges had actually struck down the law than validated it.

The Supreme Court of Canada sent the matter back to the Alberta Court of Appeal for determination of other issues. The Court of Appeal quashed the conviction and ordered a new trial on the basis that the trial judge erred in not allowing Keegstra to challenge potential jurors for cause due to major pretrial publicity.

The retrial began in March 1992, seven years after the first trial, and this one lasted four months. Twenty witnesses were called, of whom 17 were former students. Keegstra was again found guilty and this time was sentenced to a $3000 fine.

Keegstra appealed again to the Court of Appeal saying that the trial judge had erred in law when responding to jurors’ questions. A new (third) trial was ordered. Procedural issues were dealt with at the Supreme Court of Canada.

The following year, the Supreme Court of Canada answered another appeal in the Keegstra case. This time it over-ruled the Alberta Court of Appeal and upheld the second conviction. Again the top court sent the case back to the Court of Appeal for sentencing. This time, the Court imposed a mere one-year suspended sentence, one year of probation and 200 hours of community service.8

Thus, 14 years from the time Keegstra was dismissed from his teaching job, after two long trials, three sentences, three hearings in the Supreme Court of Canada and six trials and appeals in Alberta costing an estimated million dollars, an unrepentant Keegstra was sentenced to the equivalent of a tap on the wrist.

Aftermath of the Keegstra Case

Apart from the ultimately inconsequential sentence to accompany his conviction, Jim Keegstra’s personal life was seriously impacted by this ordeal. He taught for only 14 years, which coincidentally was the same length of the criminal process that dragged on after the loss of his career. He would never teach again. Having become an embarrassment to his community, Keegstra was defeated when he ran for re-election as mayor of Eckville in 1983, shortly after the allegations arose. He was a conservative, rural eccentric thrust onto a big stage as the evil face of ethnic discrimination. Ironically, that public stage granted him 14 more years to publicize his opinions. The extensive media coverage of the cumbersome legal saga may even have garnered Keegstra more sympathy, contrary to the objectives of the law.

At his final sentencing hearing in 1996, Keegstra’s lawyer noted he had otherwise “led a blameless life and always worked and supported his family and his community . . . He has been impoverished and routinely vilified in the media . . . somebody had burned his house.”

The judge at the first trial drew a parallel with Keegstra’s obsession with the Jewish conspiracy theory to a drug addict. He described Keegstra “as much a victim of the crime as perpetrator.” The judge observed that Keegstra could not be rehabilitated and that the loss of his teaching privileges was a more serious punishment than anything the court could impose.

Now, at the age of 74, Jim Keegstra keeps a low profile. He is listed as living in Red Deer, Alberta. Messages left for him requesting an interview for this article were not returned.

Application of the Keegstra Case

Of the seven Supreme Court of Canada judges who voted on the 1990 decision that upheld the constitutionality of the hate crime, only Chief Justice McLachlin remains on the Court. She wrote the dissenting opinion that would have struck out the criminal offence on the ground that it assailed too much the Charter right of free expression. While that issue might be decided entirely differently today, 22 years later, with different judges on the Court and speech having been significantly further liberalized since 1990, it is unlikely to be reversed.

Keegstra was cited as authority in a 1992 case to uphold restrictions on obscenity. More recently, the Court narrowed the application of Keegstra. Before convicting, a court must consider the “totality of the evidence . . . [to] determine whether the respondents intended to target any section of the public distinguished by colour, race, religion or ethnic origin.”

Hatred is a subjective notion, much like opinions which are presented as facts. The Keegstra case serves as another example that freedom of expression is not absolute and the content of one’s expression can be criminal. Yet Keegstra also demonstrates how poorly suited the blunt instrument of criminal law can be to achieve this kind of social control.

Many critics have viewed the Keegstra prosecution as a huge waste of time and public resources. The 14-year journey through the courts shows how difficult and impractical it may be to enforce speech laws. No actual harm or incitement to hatred need be shown to flow from the expressed content, and few Canadians can prove everything upon which they opine. It is not readily discernible what social value was realized from the Keegstra prosecutions. Laws and courts cannot forcibly change human ideas and opinions. Criminalizing speech continues to be highly controversial today. This may explain why there have been few successful prosecutions since Keegstra and why the United States today protects free speech much more broadly than in Canada.

As a result of Keegstra, many Canadians believe that the best way to discourage offensive speech, if it can be discouraged at all, is through appropriate behavioural, civil and social responses – not through criminal prosecutions.