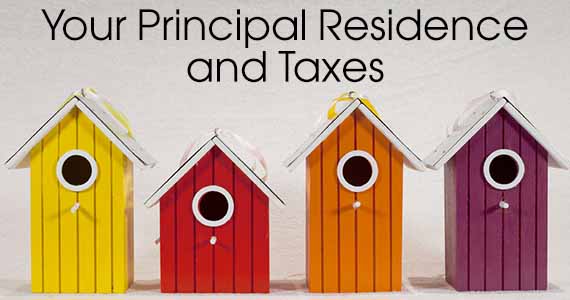 Capital gains have been subject to taxation in Canada since 1972. At present, only half of any capital gain is included in income.

While this includes property such as real estate, most Canadians are aware that there is a “principal residence exemption”, and believe gains on their home will not be taxable. For the average Canadian family, which owns and resides in a single residence at a time, this is the usual result. However, the rules can become complex in many situations, sometimes catching taxpayers by surprise.

Every Canadian resident is entitled to designate a property they “ordinarily inhabit” during the year (more on this later) as their “principal residence” for each calendar year. Since 1981, families (spouses, including common law partners, and their minor children) can designate only one property between them. Provided the property sold is designated for at least one year, a portion of the gain is exempt, computed as 1 + the number of years designated/total years owned. Years prior to 1972 are ignored in the computation.

So, when a family sells one residence and acquires a new one, they can designate the property sold as their principal residence for all years prior to the year of sale, and the entire gain will be exempt from taxation. This “1+” rule ensures a family can own two residences in the year they move without jeopardizing the tax-free status of their homes. Although the legislation requires a form (T2091) be filed to designate a property as a principal residence, the Canada Revenue Agency (CRA) has consistently maintained a policy that this form need not be filed if no portion of the gains is taxable.

The term “ordinarily inhabited” is not defined in the legislation. However, as a property can be ordinarily inhabited at any time in the year, it is not necessary that the property be the family’s main home. A summer cottage or other recreational property might be inhabited for only a week or two, but this is sufficient to allow it to be designated. A property may qualify by being ordinarily inhabited by the individual, their spouse or common-law partner, or any of their children.

For families with multiple residences, such as recreational properties, or parents who own properties occupied by their children, a choice must be made about which property to designate. For example, assume Bob and Mary own a house in the city which they purchased in 1994 for $250,000. The value of that property has risen to $750,000 by the date of sale in 2013. They can designate the property their principal residence for 19 years, and exempt 19+1/20, or 100%, of the gains.

For the years 1994 – 2003, the answer is obvious – they only owned the city house, so that is the property they will designate. But what about 2004 and later years? Every additional year the house is designated will exempt a further $25,000 of gains ($500,000/20 years). However, the condo has appreciated $300,000 over ten years, or $30,000 per year. If they also sold the condo in 2013, the answer would be pretty easy – designate that property for nine years (so the full gain would be exempt using the 1+ rule), and use the remaining 11 years for the house. Their new home can be designated for 2014 and later years, so all gains on that property will be exempt.

As they will retain the condo, they will need to estimate future appreciation – if the condo’s value has peaked, the average annual gain will decline, but if its value appreciates, the average gain may rise. Any tax on the house gain is payable immediately, while any taxes on the condo may not be payable for many years. The decision isn’t obvious, so Bob and Mary will need to consider this carefully. If they report no gains on the house, the CRA will assume they have designated the house as their principal residence for all years up to 2012. Ultimately, they will have to pay taxes on some gains on the properties. By the way, Bob plans to buy a lake cottage next year …

Breaking Up Is Hard to Do – Separation and Divorce

Spouses or common law parties must designate the same property for each year. This restriction does not apply for any year in which the parties are divorced, or are living separate and apart pursuant to a judicial separation or a written separation agreement. Where both spouses maintain a residence during the period of separation, preparing a written separation agreement should be a priority to minimize the number of years that access to the exemption is restricted. Where properties pass between spouses, or former spouses, years of ownership by either spouse are incorporated into the principal residence exemption computations.

Don’t Fence Me In – Lot Sizes

In a recent court case, Cassidy v. Canada 2011, the Federal Court of Appeal ruled that the land must be reviewed every year. In the above situation, if the zoning restrictions were relaxed to permit one hectare parcels after ten years’ ownership, gains on the excess land for those later years would be ineligible for the exemption.

Wherever I Lay My Hat – Short Stays

Some level of permanence is required for a property to be “ordinarily inhabited”. In extreme cases, individuals have “moved in” before the property was complete, sleeping in sleeping bags. This was not sufficient to “ordinarily inhabit” the property. The courts look to evidence such as moving in furniture and personal effects, changing mailing addresses and similar indicators of ongoing residency.

Where a property is acquired with the expectation of resale at a profit, this “adventure in the nature of trade” is considered a business, so any gain is ordinary income, and cannot be sheltered by the exemption. The CRA has sometimes reviewed land titles records for short periods of ownership to identify speculators whose property sales, often referred to as flips, should be treated as business transactions.

The Other Hand – GST/HST

So far, we have looked at taxes on property gains, but what about sales taxes? The GST (HST in harmonized provinces) rules applicable to real estate are complex. A builder constructs a residential property for resale is required to charge GST/HST on sale of the property. Where an individual

constructs their own property, they are required to self-assess GST/HST on the value of the property when it is substantially completed. This GST/HST payable is reduced by GST/HST paid on the land, construction materials and other costs of construction, to the extent these were not previously recovered.

A “used residential complex”, which has already been owned and occupied for long-term personal accommodation, is exempt from GST/HST. This covers most home purchases. Where a property has been “substantially renovated”, it can be treated as a new property, so that GST/HST will apply. However such renovations are considerable – the legislated definition requires that “all or substantially all of the building that existed immediately before the renovation or alteration was begun, other than the foundation, external walls, interior supporting walls, floors, roof and staircases, has been removed or replaced”. Obviously, this goes well beyond finishing the basement or upgrading the bathroom!

A rebate is also available on some new home purchases. The New Housing Rebate will refund up to 36% of the GST paid on purchase or construction of a new home for occupation by the purchaser, to a maximum of $6,300 (36% of GST on a $350,000 purchase price). If the value of the home purchased exceeds $450,000, no rebate is available, and the rebate is eroded for values between $350,000 and $450,000. The CRA’s guidebook RC4028 provides more details on this, and related provincial rebates.

The basic premise – gains on an individual’s principal residence attract no taxes – is correct. However, more complex issues often arise in issues that go beyond the most basic. The CRA has recently released the first of its new Income Tax Folios for public comment. Included among this first release is Folio S1-F3-C2, discussing the principal residence. This document is available on the CRA’s website, and provides further details of these and other issues. In unusual cases, professional advice is also advisable.