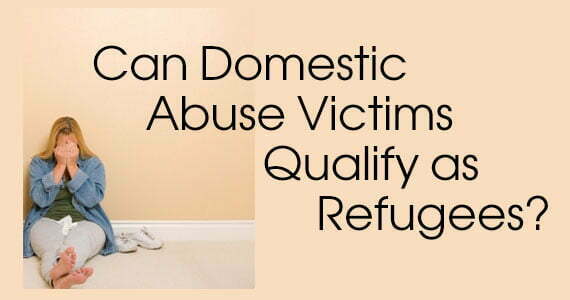 The recently-released decision of the United States’ Board of Immigration Appeals (“the Board”) in the Matter of A-R-C-G et al., (“Matter of A-R-C-G“), 26 I&N Dec. 388 (BIA 2014) may signal the United States’ growing openness to granting asylum to women who flee from domestic abuse.  While the decision itself may be considered overdue, its reasoning takes a strong critical stance against nations that do not make reasonable efforts to protect women from violence. This reasoning stands in contrast to the more conservative approach that is usually applied by courts in both the United States and Canada.

If the Board’s reasoning in the Matter of A-R-C-G is adopted by courts in the United States and elsewhere, then the threshold for making successful refugee claims will have shifted significantly in favour of future claimants who flee from abusive relationships in nations that are unwilling or unable to offer adequate protection.

The Matter of A-R-C-G dealt with a Guatemalan woman who had fled from a years-long abusive marriage to seek refugee status in the United States.  As in Canada, refugee claimants in the United States must prove three elements in order to be granted asylum on the basis of domestic violence in their home nation. The refugee claimant in this case (“the Claimant”) had fled from Guatemala after experiencing what the Board characterized as “repugnant abuse” at the hands of her husband. The abuse included weekly beatings, throwing paint thinner on her, and rape. The local police had been called following several incidence of this abuse, but had refused to interfere as these acts were considered to have been part of a marital relationship.

As in Canada, refugee claimants in the United States must prove three elements in order to be granted asylum on the basis of domestic violence in their home nation. A woman who faces domestic abuse must first prove that she qualifies as a Convention refugee based on: (1) membership in a particular social group; and (2) a well-founded fear of persecution on the basis of that membership. Where the persecution is perpetrated by a non-state party (e.g., an abusive spouse), the refugee claimant must also prove (3) the government’s inability or unwillingness to provide protection.

In Canada, claims arising from domestic abuse are often denied because of insufficient proof of the third element. In the United States, however, claimants have often been denied on the basis of the first element since the United States applies a more complex test of what constitutes a particular social group.

Because the claimant was thus found not to qualify as a Convention Refugee, the Immigration Court did not address the Guatemalan government’s willingness or ability to protect her.

Following an appeal from the decision of the Immigration Court, the Board undertook a de novo review to determine whether “married women in Guatemala who are unable to leave their relationship” constituted a particular social group for the purposes of determining Convention Refugee status.

Unlike Canada, the United States requires refugee claimants to overcome numerous evidentiary hurdles in order to establish the existence of a particular social group. While Canada has long recognized women fleeing from abusive relationships as a particular social group, these women nevertheless face significant hurdles to receiving asylum in Canada. These hurdles involve establishing that the group’s members (1) share a common immutable characteristic; (2) are defined with particularity; and (3) are socially distinct in the society in question.

The Board found that each of these requirements was met in the Matter of A-R-C-G. This finding broke new ground in American jurisprudence, as no previous published Board decision had recognized married women facing domestic abuse as a particular social group.

While Canada has long recognized women fleeing from abusive relationships as a particular social group, these women nevertheless face significant hurdles to receiving asylum in Canada.  … a presumption that foreign States are willing and able to protect their citizens. At present, Canadian courts and tribunals have adopted a high threshold for determining when claimants have satisfied this onus.Canadian courts have adopted less complex tests than the United States for determining the existence of a particular social group, and women who face domestic violence were recognized as a particular social group many years ago in Narvaez v Canada (Minister of Citizenship and Immigration), [1995] 2 FCR 55.

Despite having been long-recognized as a particular social group, women escaping domestic violence encounter a significant hurdle in proving their home State’s unwillingness or inability to protect them from an abuser. To satisfy their onus of proof, claimants must advance evidence to rebut a presumption that foreign States are willing and able to protect their citizens.

At present, Canadian courts and tribunals have adopted a high threshold for determining when claimants have satisfied this onus. Even where evidence has shown police unwillingness to interfere in a marital relationship and a lack of specific laws against domestic abuse in the claimant’s nation of origin, claimants have failed to satisfy their onus of proof (see X (Re), 2011 CanLII 99772 (CA IRB), 2012 CanLII 94152 (CA IRB)). Where the onus has been satisfied, there is often an additional source of persecution beyond domestic abuse (see 2011 CanLII 99020 (CA IRB)).

This high threshold was also recently apparent in the case of Jamila Bibi, a 63-year old woman whose refugee claim was denied despite evidence that she would face criminal charges for adultery and a possible honour killing on her return to Pakistan. Ms. Bibi was deported from Canada two weeks ago.

The Board found special significance in the Guatemalan police’s unwillingness to intervene in an abusive marital relationship, and cited a CBC report to support the Board’s finding that Guatemala has a prevalent culture of “machismo and family violence.” Based on these findings, the Board determined that violence against women in Guatemala was commonplace and the prosecution of such crimes by state authorities was “problematic.”

In Canada, the adoption of a corresponding approach to evidence of State indifference to domestic violence would open important avenues for allowing any individual who flees such violence to make a case for refugee status.

For now, much remains to be decided. If the Immigration Court adopts the Board’s findings to determine that Guatemala is incapable of or unwilling to protect the Claimant, then it will become more open for Canadian courts and immigration tribunals to adopt a similar approach. From there, Canadian courts and tribunals might focus greater scrutiny upon foreign States’ responses to domestic violence while offering more protections to those who suffer such violence.

This article was originally published on September 29, 2014 on the website “The Court” a project of the Osgoode Hall Law School, and is reprinted under a Creative Commons License. (Note: Selection of callouts is ours)

TheCourt.ca is staffed by editors who are students at Osgoode Hall Law School, York University working under the supervision of a faculty member. Maciej Lipinski is a senior contributing editor and 3rd year student in the J.D. program (2014).