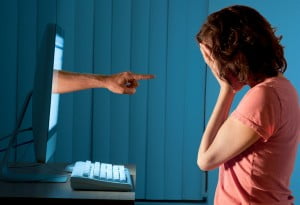 Facebook, Instagram, Twitter, texting or similar means of communicating over the Internet have given new challenges to teachers, parents and most of all, youth. We tell youth to be cautious, to use their common sense, to not talk to strangers and to keep their personal information private. And yet these precautions, even when followed, do not always protect youth from cyberbullying. Cyberbullying is a serious issue in schools and in the after-school life of children as young as six years old.

However, part of the problem in preventing, punishing and educating on cyberbullying is the difficulty in finding a common definition of “cyberbullying”, and the very real problem of downplaying Criminal Code offences as bullying.

In the past year the media has reported on at least two high profile cases that were labeled “cyberbullying”, and that received mainstream media attention across Canada. One was the case of Amanda Todd, from Port Coquitlam, British Columbia, who killed herself after being “cyber- bullied”. Amanda Todd posted an eight-minute video where she explained, through flash cards how she and her friends were talking on a web-cam with another person. She was 12 years old and she playfully flashed her chest. The person on the other side of the web-cam turned out to be a grown man and not a young boy. He posted the image of her bare chest online. Then he stalked Amanda Todd every time she moved to a new school and sent out the video to her classmates. Bullies at school taunted Amanda Todd, with names such as “porn star”. She hung herself in 2012, at age 15.

The Nova Scotia Task Force reviewed many definitions of “bullying” and “cyberbullying” and recommended that the following definition be used for education and legislation in the province:1

Bullying is typically a repeated behaviour that is intended to cause, or should be known to cause, fear, intimidation, humiliation, distress or other forms of harm to another person’s body, feelings, self-esteem, reputation or property.

Bullying can be direct or indirect, and can take place by written, verbal, physical or electronic means, or any other form of expression.

A person participates in bullying if he or she directly carries out the behaviour or assists or encourages the behaviour in any way.

The cases of Amanda Todd and Rehtaeh Parsons both have elements described in this definition: repeated behaviour, intended to cause fear and distress, harm to the “person’s body, feelings, self-esteem, reputation”. The harassment in Amanda Todd’s case took place electronically. In Rehtaeh Parsons’ case there was the use of technology to distribute pictures of an alleged rape. In both cases other people encouraged the behaviour. On its face, the actions were akin to cyberbullying and were treated as such in the media, and by those who commented on the horrible actions that led to these two girls taking their own lives.

However, on closer examination these cases are much more complicated than cyberbullying. Amanda Todd was being stalked and harassed by a man who lived somewhere in the United States. He lured her into flashing her naked chest and then took a video, which he posted online. These are all criminal offences under the Criminal Code: stalking (Criminal harassment s.264), Internet luring (s.172.1), and distribution of child pornography (s.163.1(3)). Rehtaeh Parsons said that she was raped which is a sexual assault (s.265). Afterwards, pictures of the events were distributed online, arguably also a criminal offence, which would possibly be dealt with under the Youth Criminal Justice Act if those distributing were under the age of 18 years.

We should not be appalled at cyberbullying only when it results in such heinous acts that they must be described as Criminal Code offences. Cyberbullying deeply affects the child who is texted mean messages about her appearance, who is told by text that she is uninvited to a social gathering, or whose picture is posted online and laughed at. Cyberbullying is something that affects a youth’s ability to learn, grow and enjoy school, not something that results in criminal actions against her body or fear of being stalked.

Youth must be encouraged to report cyberbullying. If we continue to conflate cyberbullying with Internet luring, sexual assault and child pornography, youth will not report bullying that takes place online. Reporting cyberbullying is a key component to combating this issue.

In 2010, a 15-year-old girl (A.B.) did report a case of cyberbullying. A.B. discovered that someone had signed up a Facebook account using A.B.’s picture and a slightly different name. A.B.’s picture was posted on the Facebook account with unflattering sexual comments about her appearance. A.B. wanted to find out the identity of the user who had started the Facebook account and posted her picture. However, A.B. wanted to proceed with the case anonymously and also asked for a publication ban. The case went to the Supreme Court of Canada (A.B. v. Bragg Communications Inc. 2012 SCC 46) to consider whether A.B. had demonstrated that there was a “real and substantial harm to her which justified restricting access to the media” (para 7). The SCC said:

If we value the right of children to protect themselves from bullying, cyber or otherwise, if common sense and the evidence persuade us that young victims of sexualized bullying are particularly vulnerable to the harms of revictimization upon publication, and if we accept that the right to protection will disappear for most children without the further protection of anonymity, we are compellingly drawn in this case to allowing A.B.’s anonymous legal pursuit of the identity of her cyberbully. [para 27]

A.B. was allowed to proceed anonymously, but the publication ban on non-identifying information was not granted since A.B.’s identity would be protected by being anonymous.

Having the courage to make a cyberbullying claim is just one aspect of addressing this issue in a thoughtful manner that will encourage youth to report bullying and also support peers who are being bullied. Conflating the issue of cyberbullying with sexual assault, child pornography and other Criminal Code offences undermines the efforts to address problems that are, at the core, cyberbullying. Distributing naked pictures of girls online is not cyberbullying just because it uses technology. It is a criminal offence that warrants a response by Police and RCMP.

Both issues are important and highlight grave challenges for parents and youth. Lawmakers must ensure that the Criminal Code has measures to address the horrible actions of stalkers and pedophiles who use the Internet to lure children. Schools, school boards, communities and governments have a responsibility to address and educate children and youth about cyberbullying, by children against children, in legislation, policies and procedures.

1 Respectful and Responsible Relationships: There’s No App for That: The Report of the Nova Scotia Task Force on Bullying and Cyberbullying (2012) at p. 42.