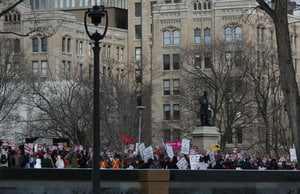 On January 30, 2015, the Supreme Court of Canada decided Saskatchewan Federation of Labour v Saskatchewan (“SFL”). In a 5-2 decision, the Court determined that the Public Service Essential Services Act (“PSESA”), in restricting certain public sector workers’ rights to strike, violated freedom of association rights under section 2(d) of the Canadian Charter of Rights and Freedoms (“Charter”). Another piece of impugned legislation, the Trade Union Amendment Act (“TUAA”), which focuses on the union certification process and employer-employee communications, was found to be in accordance with the Charter.

The Supreme Court grappled with a central question that occupied most of the decision, both for the majority and dissent: does restriction on the right to strike violate s 2(d) of the Charter, and why? This past January, the majority of the Supreme Court came through with an emphatic decision that the workers’ right to strike is a fundamental Canadian value. This is a tough decision because it engages two contrasting Canadian values: the necessity for Canadians to have essential services like police officers and firefighters available at a moment’s notice, and the importance of employee voice in the workplace.

The extent of s 2(d) on labour relations has a tumultuous recent history, having been considered twice earlier by the Supreme Court since 2007. The Supreme Court’s decision in SFL demonstrates the difficulty associated with the application of Canada’s highest law to conditions of employment. There are still questions left unanswered which will likely be the impetus for upcoming litigation.

SFL dates back to 2007, when Saskatchewan’s provincial government passed these two statutes. Both came into force on May 14, 2008. The Saskatchewan Federation of Labour and other unions challenged the constitutionality of PSESA and TUAA on the basis that they interfered with their right to freedom of association under s 2(d) of the Charter.  The right to collective bargaining rooted in good faith negotiation was confirmed in 2007 in the BC Health Services case.  By the time SFL went to trial in 2012, the Supreme Court had decided Ontario (Attorney General) v Fraser (“Fraser”). In Fraser, the Court clarified the rights accorded in BC Health Services through the determination that workers do not have the right to a particular type of collective bargaining or substantive outcome but still have the right to a good faith bargaining process of some kind.

The Saskatchewan Court of Queen’s Bench allowed the unions’ action with respect to PSESA but not with respect to TUAA. The Saskatchewan Court of Appeal, in a 3-0 decision, allowed the government’s appeal but not the union’s, declaring both PSESA and TUAA constitutional. At no point did any court consider TUAA’s certification process modification or newfound ability for employers to communicate “facts or opinions” to unionized workers to run afoul of freedom of association.

The SCC’s Decision in SFL

Justice Abella, writing for the majority, identified four key areas in which PSESA was either vague, overbroad, or invalid procedurally: The majority’s arguments are best summarized in this one sentence: “The right to strike is not merely derivative of collective bargaining, it is an indispensable component of that right.

She also delivered more philosophical reasons for the Court’s ultimate decision to enshrine the right to strike in the Charter:

The majority’s arguments are best summarized in this one sentence: “The right to strike is not merely derivative of collective bargaining, it is an indispensable component of that right. It seems to me to be the time to give this conclusion constitutional benediction.”

The dissent, written by Justices Rothstein and Wagner, affirmed Re PSERA while putting SFL into a more procedural context. Their crucial points were that enshrining the right to strike in the Charter:

These two intractably opposed positions are grounded in the constant struggle between employer and employee, judiciary and legislature, and precedent and evolving law.

Although SFL raises many questions in the areas of labour relations, constitutional and international law, as well as statutory interpretation and public policy, one of the labour relations questions looms large: Did the Supreme Court have to enshrine the right to strike in the Charter in order to acknowledge workers’ rights in Canadian society?

Arguably, the majority could have simply created a “strike or explain” doctrine in which any statute removing the right to strike for essential services employees must comply with certain criteria already set out in the majority’s decision. These two intractably opposed positions are grounded in the constant struggle between employer and employee, judiciary and legislature, and precedent and evolving law. Rather than say that such a statute presumptively violates s 2(d) of the Charter, placing the burden entirely on the government, the Court could have set out that such a statute without a dispute resolution mechanism or labour board oversight violates s 2(d). PSESA still would have been struck down, accomplishing the result of the day, but the decision would not overtly question the constitutionality of other, more balanced essential services statutes. An example is Ontario’s Crown Employees Collective Bargaining Act, 1993, which contains a limited right to strike, detailed essential services definitions and a labour relations board section, but is not used as a comparison by either the majority or the dissent in SFL. Put simply, rather than guarantee the presumptive right to strike, the majority could simply have guaranteed the availability of some form of dispute resolution. This is one of many possible alternate routes to upholding Charter values.

The majority’s view, however, was that the right to strike holds a special place in labour relations. In reaching this conclusion, the Court cited Mounted Police Association of Ontario v Canada (Attorney General) in discussing statutes that “disrupt the balance between employees and employer”. To the majority in SFL, in summary, “The right to strike is essential to realizing these [Charter] values and objectives through a collective bargaining process because it permits workers to withdraw their labour in concert when collective bargaining reaches an impasse.” It is solely the removal of the ability to withdraw services that factors into their s 2(d) analysis.

This past January, the majority of the Supreme Court came through with an emphatic decision that the workers’ right to strike is a fundamental Canadian value. Beyond labelling PSESA an unclear statute that does not properly explain how it plans to honour Charter rights, the majority also discussed Canada’s evolving domestic and international obligations. The dissent was wary of expanding a bedrock document like the Charter past its original wording, and was also concerned with moving too much power from the legislatures to the judiciary. The swath of recent case law on the subject indicates that SFL may not be the last time the Supreme Court hears this sort of issue.

There will doubtless be future litigation over the meaning of SFL and any legislative exceptions to it. It may be dangerous to have, for example, healthcare workers engaging in large-scale strike activity, as was the case in Saskatchewan in 2001. The balance between essential services and the newly minted Charter right to strike presents more questions that can be answered in a single decision.