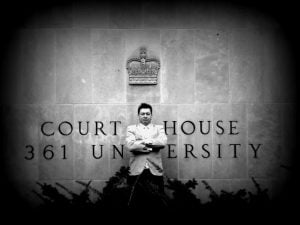 About a year ago, there had been some publicity concerning Louie v. Louie BCCA, a court case where I acted as barrister and solicitor for an intervenor at the B.C. Court of Appeal. The case had involved a band member who sued his Chief and Council for a breach of fiduciary obligation. I was approached at different times by a number of other concerned people who also wanted to sue the leaders in their communities over things such as alleged mismanagement of communal funds or even bigger questions about who has authority in land claims, etc.

I remember that one of the chiefs sued in Louie v. Louie, commented to me about the practice of band members suing chiefs. If I recall, his comment was that it shouldn’t happen. Chiefs are part of the fabric of the community; they themselves stem from the grassroots people and often have the highest hopes for their communities. I very much agree; it shouldn’t have to happen. However, there are times when individuals feel that they have no choice but to turn to the court to try to get their issues resolved.

Negotiation produces a better outcome because both sides might end up with having their interests met in some way, whereas in litigation there is a winner and a loser.Here, at this juncture, is when Indigenous law has an opportunity to flex its muscles and become the authority but that is not always the case. Rather than seeking resolution through consent-based processes that likely involve Elders and other community people, the courts are sought for binding judicial decision-making.

It’s not an easy process to go to court, especially in situations where there is an imbalance of power, for example, between a chief and grassroots band members. Oftentimes, grassroots band members lack the financial capacity to carry a case through to completion of trial because the court system has become an expensive process.

Speaking of costs, the Tsilhqot’in case is the landmark Aboriginal title case in Canada and the only case where the judiciary has ruled that a First Nation has Aboriginal title. It cost tens of millions of dollars. How different is this than the First Nation that borrows $25 or $30 million to negotiate a treaty? Well certainly there are big differences, but in the big picture, the end result is similar. In both processes, there are vast expenditures of resources, and ultimately, there is settlement of some kind that involves setting out treaty land or aboriginal title land. To me, they are the same thing.
One of the biggest advantages of negotiation over litigation is that the parties involved control the outcome through consent. When litigation is involved, a judge, or at times, a jury determines what the outcome is going to be and it isn’t always good. Negotiation produces a better outcome because both sides might end up with having their interests met in some way, whereas in litigation there is a winner and a loser.

The issue of access to justice in an Aboriginal context recently came up in a report tabled in 2015 by the Truth and Reconciliation Commission of Canada in the Calls to Action…For Indigenous people, the question of access to justice remains outstanding. Certainly, there are times when going to court will achieve the desired outcome because of the entrenchment in both sides, which is the basic unwillingness to make any compromises. The band member that believes that the chief and/or council has been doing something untoward with communal resources, or a First Nation wants to obtain a declaration of Aboriginal title from the court. There are cost consequences and because of that, barriers to the legal system exist. Grassroots band members face barriers because they may not have any money, may be unemployed or their income may be insufficient to hire a lawyer. Likewise, First Nations lack access to the tens of millions of dollars it might require to prove an Aboriginal title case.

As a member of an Indian band myself, I know firsthand what its like to be part of an Indian Band. Within the Band system under the Indian Act, there are oftentimes feelings of oppression, jealousy, and lateral violence. It has been said that if you have a bucket of red crabs and a bucket of crabs of some other colour, the red crabs can never quite seem to escape from the bucket on account of jealousy and lateral violence while other crabs manage to all free themselves. When a person starts to get ahead, there are other people that will pull that person back down, just like the bucket of red crabs. This is what goes on in Indian communities. However, the Indian Act system requires an elected leadership and so eventually power flows to a few individuals that make decisions, control Band funds, and so on.

The issue of access to justice isn’t going to go away very soon but in the meantime, Indigenous people have section 35 of the Constitution Act 1982 that guarantees Aboriginal rights.Someone recently sent me a letter they received from Aboriginal Affairs and Northern Development Canada. It said that if a person has a problem with anything from housing to complaints about the Band Council for unfairness, they are to bring their concerns to their Band Council for resolution. To me, it seems like seeking resolution from the very person or persons causing the problem may cause further problems, such as being blacklisted from employment, housing, renovation funds and the like. It’s akin to a person in an abusive relationship; approaching the abuser sometimes isn’t the cure at all. With that said, the same occurs in adverse court proceedings; hostility arises.

When problems arise at the Band level, the usual course of action is to hold a Band meeting, but each community have their own ways of dealing with disputes. This is problematic as I’ve heard some communities haven’t had Band meetings in years. When a decision has been made by a Band Council, it should be documented by Band Council Resolution made at a duly convened meeting. These decisions are considered to be much like a court decision in that it is made by a federal tribunal and can be challenged under a judicial review process. The judicial review process in the Federal Court requires filing within 30 days of the decision being made and that it is expensive to hire a lawyer to bring a case for judicial review.
The issue of access to justice in an Aboriginal context recently came up in a report tabled in 2015 by the Truth and Reconciliation Commission of Canada in the Calls to Action which include calling upon, “… the federal, provincial, and territorial governments to commit to the recognition and implementation of Aboriginal justice systems in a manner consistent with the Treaty and Aboriginal rights of Aboriginal peoples, the Constitution Act, 1982, and the United Nations Declaration on the Rights of Indigenous Peoples, endorsed by Canada in November 2012 (TRC )”. Recommendation number 50 states:

Equity for Aboriginal People in the Legal System

In keeping with the United Nations Declaration on the Rights of Indigenous Peoples, we call upon the federal government, in collaboration with Aboriginal organizations, to fund the establishment of Indigenous law institutes for the development, use, and understanding of Indigenous laws and access to justice in accordance with the unique cultures of Aboriginal peoples in Canada.

Here, at this juncture, is when Indigenous law has an opportunity to flex its muscles and become the authority but that is not always the case. Rather than seeking resolution through consent-based processes that likely involve Elders and other community people, the courts are sought for binding judicial decision-making.If indigenous people embrace Indigenous law and truly look to their inherent rights, perhaps they can revive the Indigenous legal traditions for a better system, one that doesn’t cause friction in the community and brings about communal consensus based dispute resolution. Perhaps, if there were an Indigenous law institute, an individual band member who has no funds for litigation could still bring their chief to a forum where fairness is achieved without worrying about which side has more money. It also could be the place for early collaborative measures, which is what the Parents’ Legal Centre does in downtown Vancouver when it comes to Aboriginal kids in child protection matters. What is required is full support from all levels of government, law societies, First Nations and Metis organizations, and of course, the public.

The issue of access to justice isn’t going to go away very soon but in the meantime, Indigenous people have section 35 of the Constitution Act 1982 that guarantees Aboriginal rights. It is this guarantee that should be looked to in reviving Indigenous legal traditions, because in my mind, the court cannot be the answer to all the problems that exist. I am reminded of what the late Chief Justice said at the end of the Supreme Court of Canada decision in the 1997 landmark Delgamuukw case when he referred the matter back to trial but also strongly suggested a negotiation process of give and take from all sides. Chief Justice Lamer stated, “after all, we are all here to stay”.

That comment is often quoted in matters of indigenous peoples and reconciliation. It‘s an important thought because whether or not we are dealing with an indigenous community surrounded by non-indigenous people, or if the matter is internal to an Indian Band, we should all remember the words of the late Justice Lamer: after all, we are all here to stay.