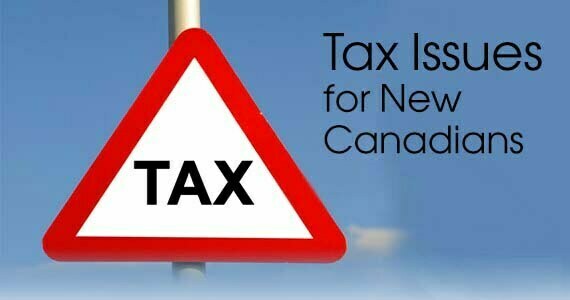 While there are many attractions to Canada, I cannot recall anyone attracted by a desire to experience our income tax system! Like most developed tax systems, ours can be extremely complex, and can impose results perceived as neither just nor equitable. Many tax issues are unique to new Canadians, while others are more likely to affect them.

Wherever I Lay My Hat…

Like many countries, Canada taxes on the basis of residency, and Canadian residents are taxable on all income earned, whether arising within or outside Canada.

The determination of residency can be an uncertain area. The tax courts look to “residential ties” to determine a person’s residency. Stronger residential ties include a dwelling place (owned or rented), the residency of a spouse and dependents (e.g. children), and the duration and frequency of trips to Canada. Weaker ties, more commonly examined where the major ties are either inapplicable or divided, include personal property (e.g. clothes, vehicle, furniture), social ties (e.g. club memberships, church), economic ties (e.g. investments, bank accounts, credit cards) and personal ties (e.g. health care, driver’s licence, voting, non-dependent relations). Provincial health care coverage generally requires residency in a province, making this a common question from skeptical CRA auditors. An Alberta resident covered by provincial health care is likely a Canadian resident as well. Canada Revenue Agency (CRA) form NR74 sets out many of the issues the CRA will consider in making a residency determination.

Canada Revenue Agency (CRA) Form NR74 sets out many of the issues the CRA will consider in making a residency determination.

Some individuals are deemed resident in Canada regardless of residential ties. These include many government employees such as members of the Armed Forces, as well as any person who is physically present in Canada for 183 days or more in the calendar year (commonly referred to as a “sojourner”).

I Just Got Here!

The sojourner is easily confused with a part-year resident. An individual who takes up residency in April will be in Canada more than 183 days in the year, while one arriving in September will not. The sojourner rules only apply to someone whose actual residency has not changed in the year. Where residency commences (or ends) in a calendar year, that person will be subject to tax on world-wide income for that portion of the year in which she was resident, and only on income from Canadian sources for the portion of the year when she was non-resident.

The date of change is also important for other reasons. For most part-year residents, eligibility for personal credits to reduce taxes is pro-rated for the period of residency. Someone commencing residency on December 1 would only qualify for 31/365 of the usual credits. There is an exception for an individual subject to Canadian taxes on “all or substantially all” (typically considered 90% or more by CRA) income for the year. For example, an immigrant who earned no income prior to arriving in Canada on September 1 would qualify for full credits, as all of their income is taxed here.

A person taking up residency is also considered to have purchased most of their property (some exceptions, like Canadian real estate, exist) at its value immediately prior to taking up residency. Effectively, this resets the cost of the property at its value on immigration, exempting gains (or losses) occurring from Canadian taxation while the owner is  not a resident.

An immigrant may also be subject to taxation in his country of origin, possibly resulting in two countries taxing the same income. Most countries have a network of income tax treaties which govern how taxing rights are divided, and intended to minimize double taxation. In Canada, treaties override domestic law in all cases of conflict. Treaties commonly address “tiebreaker” rules to ensure an individual is not considered resident in multiple countries.
Most treaties also address income taxed in both countries, requiring one country to provide tax relief for taxes paid to the other.

As well, treaties may provide that certain income is taxable only in the country of source, or the country of residency. Income exempt from Canadian taxation must still be reported on an income tax return, but is deducted from taxable income. Such income remains part of “net income”, which determines eligibility for some social benefits, such as the Canada Child Tax Benefit and the GST Credit, or the Social Benefits Repayment which can “claw back” employment insurance and old age security.

Some income is not exempted from tax, but the maximum tax which can be charged is restricted. This is common for passive income sources like dividends, interest and royalties.

Most treaties also address income taxed in both countries, requiring one country to provide tax relief for taxes paid to the other. Most commonly, this takes the form of a “foreign tax credit” where the country in which the income is earned has the first right of taxation, and the other country reduces its own taxes by the tax paid to the first country. This is intended to restrict the total cost to the greater of the two countries’ taxes. Canadian tax legislation provides for foreign tax credits regardless of whether a treaty imposes that requirement.

Tell Me All About It!

…the costs of moving to Canada are not deductible…

The most common filing is required where the person owns SFP having an aggregate cost in excess of $100,000 (in Canadian funds) at any time in the taxation year. Generally, such property reflects investments, such as foreign bank or securities accounts, shares or debt of foreign corporations or other entities, foreign real estate and interests, and foreign trusts like mutual funds. Property used in active business outside Canada, used primarily only for personal use (e.g. a vacation home), and property requiring disclosure under other provisions falls outside the SFP provisions.

These filings are not, however, required to be filed for the year a person first becomes a Canadian resident, nor if the property was not owned while the person was a non-resident of Canada.

Normally, the Canadian income tax rules permit an individual to claim the cost of moving to take up employment or operate a business. Unfortunately for new Canadians, such a deduction is not available for moves commencing or ending outside Canada unless the individual was a resident of Canada both before and after the move. As a result, the costs of moving to Canada are not deductible in this manner.

Is That All There Is?

This is a very general summary of Canadian tax rules specifically relevant to new Canadians. Numerous other general and specific provisions exist which can impact new and existing Canadians to varying degrees. Additional information can be obtained online from the Canada Revenue Agency, including information for new Canadians specifically. Unfortunately, the Canadian tax system too often provides a poor welcome indeed to new Canadians. It is small consolation that longtime Canadians also commonly consider it unwelcoming.