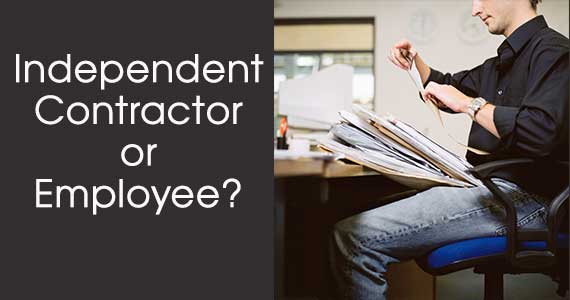 With business culture evolving, we see increasingly varied means to manage one of the most expensive and critical components of a business – human capital.  Whether a business is motivated to reduce labour costs, streamline available skills, or minimize staff during slower periods, At first blush, it may appear easy to determine whether individuals are employees or ICs.businesses are tending to engage independent contractors (ICs) as compared to employees.  For the purposes of this article, unless otherwise stated, an IC is a self-employed individual, whether incorporated or not.  Note that this discussion may not apply to contracts entered into in Quebec.

How do I know if I am an employee or IC?

At first blush, it may appear easy to determine whether individuals are employees or ICs.  Have they signed an employment contract?  Did they receive a T4 Statement of Remuneration Paid from the payer?  Do they report ‘employment income’ or ‘business income’ on their tax returns?

A common intention can be communicated in a number of ways – for example, in emails, an informal verbal arrangement, or a formal written agreement. If the worker or payer is unsure of the relationship, either party can request a ruling from CRA to have the status determined.  In other words, a contract between the worker and payer may assist in providing support to CRA or a court of a certain intention.  However, quite often these contracts may not be afforded much weight if the nature of the relationship is not consistent with the expressed intention.

That said, a contract can provide another very important role in documenting the terms of the relationship.

After considering the intention of the worker and payer, CRA and the courts normally consider the following five main factors:

Control is the ability, authority or right to determine the manner in which a worker performs the work to be done.  More control is generally exercised over employees than ICs.  Control is often the most critical element in these decisions. The degree of control a payer has over a worker may indicate whether the worker is an IC or employee (though the industry may also impact type and degree of control).

It is the right of a payer to exercise this control that should be considered, rather than whether or not they actually exercised it.  More control is generally exercised over employees than ICs.  Control is often the most critical element in these decisions.

Consider who owns, rents or leases the tools to do the work.  A worker who has made a significant investment in a tool is likely to retain significant rights over the tool, thereby diminishing a payer’s control.

Tools can range from the equipment required for the work, Consider who owns, rents or leases the tools to do the work. to the workspace used to do the work and even intellectual tools such as training and experience.

Consider whether a worker can realize a profit or incur a loss.  ICs have the ability to pursue and accept contracts, whereas employees are not normally in a position to realize a business profit or loss.  Even if employees are paid based on commissions, or provided a production bonus, the increase in income is not usually considered profit.

Factors that may indicate an employment relationship include;

Consider any ongoing costs the worker may bear.  Employees do not usually bear financial risk, as costs they incur may be reimbursed, and they do not have fixed ongoing costs.

Consider integration of the worker’s job in the payer’s business.  An employee is generally more integrated into a business, as compared to an IC, which is more ancillary to the business.

If the worker or payer is unsure of the relationship, either party can request a ruling from CRA to have the status determined.

Further discussion on these considerations can be found on the CRA website and in their Guide RC4110 – Employee or Self-employed.  CRA also provides specific commentary on certain industries (eg. real estate and construction) that tend to trigger more questions.

The Impact of an IC being considered an Employee – What’s the Downside?

The debate over whether an individual is an employee or IC may seem insignificant at first, however, for those affected, it can be crippling.  Though the tax costs can be high, other non-tax considerations can also significantly impact a payer and worker.

Payers are not required to withhold certain source deductions such as the Canada Pension Plan (CPP) and Employment Insurance (EI) premiums for ICs.  However, subject to a few certain exceptions, employers are required to withhold these amounts for employees.   CRA will often assess the payer with CPP and EI premiums (for both employer and employee portions) when they consider an individual to be an employee rather than an IC.  This can be a costly bill. The debate over whether an individual is an employee or IC may seem insignificant at first, however, for those affected, it can be crippling. For example, a corporation engages 10 ICs for many years paying them $50,000 annually.  If CRA assesses all ten workers as employees for the preceding three years (which is commonly the case), the bill for the CPP would exceed $130,000. CRA may also assess EI, and penalties and interest on the total balance due.   Often, these disputes arise when an IC is terminated and applies, perhaps incorrectly, for EI.

The financial costs do not necessarily end with the tax bill, however.  Individuals considered employees may be entitled to benefits and rights, such as overtime pay, vacation pay, and minimum wage, included in their province’s respective Labour Standards or Employment Standards Codes.

Take, for example, the $180 million class-action lawsuit brought against the Canadian Hockey League (CHL) alleging that the junior hockey players are in fact employees and not ICs.  The lawsuit claims that, as employees, the players are entitled to a minimum wage, as well as certain other benefits such as holiday, overtime and vacation pay,and is claiming punitive damages.  Further, if the workers are found to be employees, the CHL may also be liable for additional amounts (if challenged by CRA), such as CPP and EI.

The Impact of an Employee being considered an IC – What’s the Downside?

In some cases, an individual may apply to Service Canada for certain employment benefits, such as employment insurance (EI), maternity or paternity leave or disability benefits, only to be  denied on the basis he or she is an IC.  For example, individuals may believe they are entitled to maternity or paternity benefits and budget accordingly.  When the baby arrives, and benefits are denied, the family may suffer significant financial costs and stress.

Also, should workers be considered ICs and not employees, they could face GST/HST issues due to failure to collect and remit this tax.

One common way payers try to avoid being considered an employer is to require their workers to incorporate.  The corporation then provides the worker’s services.  This may offer benefits to both parties: the payer is not subject to ‘employment’ benefit rules, and the worker may enjoy tax advantages unavailable to employees.  However, if the relationship would be one of employment, absent the corporation, the arrangement may be considered a PSB, attracting significantly higher taxes.

Incorporated workers must be diligent to ensure that they are not engaged in an ‘employment-like’ relationship.  Similar considerations as those mentioned above would determine whether a PSB exists.  However, the courts may not consider the intention of the parties in analyzing such relationships.

As the above indicates, the classification as an employee or IC carries significant implications for both parties.  Both should take proper care to ensure appropriate treatment.