You are here: Home / Feature Articles / 38-4: Language and the Law / The Intersection of Law, Language and Culture
Reading Time: 8 minutes 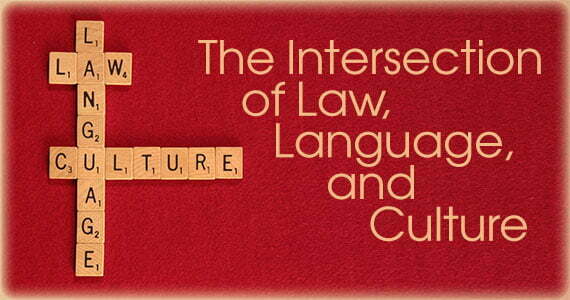 When we think of the intersection of law and language, most of us reflect on the linguistic sides of the issue, such as: questions about why law-makers use certain words as opposed to others, queries about ‘legalese’, and problems of misunderstanding, interpretation and translation. Rarely do we spend much time considering the possibility that the language we speak might itself form the basis for the granting – or denial – of certain legal rights and responsibilities.

However, in Canada, this question of ‘language rights’ is a very important part of the legal landscape. Whether we are born in Canada or move here later in life, we learn that this is a bilingual country. We also learn that minority official language speakers (the French language minority outside of Québec, and the English language minority inside Québec [1]) have language “rights” and that these rights are sometimes protected by Canada’s constitutional framework (including the Canadian Charter of Rights and Freedoms). But what exactly are these rights? Why do we have them, and when can we use them? And are these rights always constitutionally protected?

The structure of our bilingualism, and more specifically of our constitutionally-protected minority language rights, stems from our history. Canadian law recognizes that both the English and the French communities, and therefore, languages, played an important role in the founding of the federation now known as Canada. It recognizes that language is a fundamental aspect of individual identity and an expression of community and culture. Canada’s bilingual character is also a fundamental aspect of Canadian national identity. It is a reference for national pride and patriotism. Like the flag and the national anthem, our bilingual composition portrays the national personality. Minority language protections ensure that all of these aspects of Canadian identity will be preserved.

It is these governmental commitments to the importance and equality of the English and French languages that have led to the bilingualism we know and enjoy today. Unlike some other countries, Canadian bilingualism is not one wherein most people in the country speak both languages fluently. Like the flag and the national anthem, our bilingual composition portrays the national personality Instead, Canadian bilingualism reflects the reality that there are a large number of people who speak one language, and a large number of people who speak another (in Québec alone, there are almost 8 million French-speakers). This bilingualism is then echoed in the language-related rules and programs that are in place. The result: Canada has two official languages and numerous legal protections for minority official language rights (the French language minority outside of Québec, and the English language minority inside Québec).

The rules around our constitutionally-protected minority language rights, including who gets to decide what, are complicated, and equally steeped in history. To understand the greater picture, we must step back for a moment.

The basic rules that dictate which level of government can make laws in a particular sector are set out in sections 91 (federal) and 92 (provincial) of the Constitution Act, 1867 (“CA 1867”, formerly known as the British North America Act or “BNA Act”). Under the CA 1867, the word “language” itself does not appear in any of the lists in either s.91 or s.92. Instead, the authority to make laws about language is tied to each particular non-language subject matter. As a result, there is no single and complete power to make laws that are only about language, and powers over language are divided between federal and the provincial/territorial governments. Alongside the Charter and other constitutional protections, the federal government has passed additional laws about language rights. One example is the Official Languages Act. Again, however, this kind of legislation applies only to the federal government. Furthermore, the federal government has transferred some of its powers to the territorial governments in Nunavut, the Northwest Territories and Yukon.

It is important to understand what kind of language rights there are. In a nutshell, language rights appear in various kinds of law, and the kind of rights or protections that they give depends on the nature of the law.

The most permanent commitment to bilingualism comes from the language rights that are enshrined in the Canadian Charter of Rights and Freedoms (the Charter), section 133 of CA 1867 and section 23 of the Manitoba Act, 1870. These rights guarantee, under certain conditions, the use, protection and development of minority languages in certain sectors: education, governmental communications and services, legislation and publications, and judicial rights. These rights are essentially permanent; as they are difficult to alter (there is high standard for changes to the Charter and to other constitutional documents). However, although they affect people across Canada, and except in matters of minority language education rights, these rights are limited to the federal government, and the governments of Québec, Manitoba, and New Brunswick (the only officially bilingual province).

Due to its bilingual status, the government of New Brunswick has also passed additional language laws that work alongside the Charter. The laws of other provinces/territories contain some language rights, but they are generally less extensive. The exact nature of these “rights” varies. Some provinces/territories have created laws that grant rights and protections. For example, in Manitoba and Ontario, a person can complain to a court if those laws are not respected. Other provinces, however, have not created such language laws. Instead, they have merely directed some government departments and service providers to communicate and offer services in the minority official language. In such instances, official minority language communication and services provided by provincial or private organizations are a matter of policy, not of right.

As noted, the clearest and most permanent language rights are those enshrined in the documents of Canada’s constitutional framework. These rights can be divided into the following four general categories.

Under section 23 of the Charter, Canadian citizens who are in an official language minority in their province/territory have the right for their children to be educated in the minority language. However, the Charter adds some criteria. For example, in all provinces/territories except Québec, the eligibility criteria are: that the first language of the parent is French and that he or she still understands French, or that the parent had his/her primary education in Canada in French. In addition, once one child is enrolled in French school, all the other children in that family may access French-language education. However, there can still be variations from place to place, in exactly how this right is fulfilled. Sometimes, a sufficient number of minority language children may result in a French-language school being built in a particular area. Other times it may only result in French- language instruction within a larger English-language school, or in a right for the children to be transported by bus to a French-language school in another area.

3. Legislation and other Governmental Publications

All federal laws (and regulations) exist in both languages. So, too, do the laws of New Brunswick, Manitoba, Nunavut and the Northwest Territories. Furthermore, for some of these jurisdictions, even the journals, order papers, notice and minutes, and Hansard records are kept in both official languages.

Again, however, this is not necessarily true of all other provinces and territories. Some jurisdictions have chosen – either as a matter of provincial/territorial law or a matter of policy – to publish some or all of their laws in both languages (such as Newfoundland and Nova Scotia). All federal laws (and regulations) exist in both languages. So, too, do the laws of New Brunswick, Manitoba, Nunavut and the Northwest Territories. Furthermore, for some of these jurisdictions, even the journals, order papers, notice and minutes, and Hansard records are kept in both official languages.  In others, for example, British Columbia, laws are only available in English.

The publication of court decisions also follows a similar pattern. The federal courts and the Supreme Court of Canada publish all decisions in both official languages. On the other hand, not all criminal trials result in decisions being issued in both languages. In fact, most don’t. It depends on the language of the proceedings and/or the importance of, or general public interest about, the issue (sometimes, such as when the trial was in French, the decision may be published only in French). Similarly, decisions resulting from non-criminal provincial/territorial proceedings may or may not be available in both official languages, depending on the language laws of the province/territory.

Judicial language rights pertain to the possibility for an individual to use either French or English in the judicial system, especially court processes. Section 133 of the CA 1867 guarantees these language rights in any court established by Parliament (the federal government) and the courts of Québec. Section 23 of the Manitoba Act 1870 and section 19 of the Canadian Charter of Rights and Freedoms guarantees similar language rights in Manitoba and New Brunswick. Rarely do we spend much time considering the possibility that the language we speak might itself form the basis for the granting – or denial – of certain legal rights and responsibilities. The courts of the other provinces/territories are not bound by any such constitutional provision, except where the Criminal Code, which is federal legislation, says differently.

Criminal law is in the jurisdiction of the federal government. Therefore,  there is the possibility of having a criminal trial (including the preliminary inquiry) in French. French-speaking judges are available. You can choose to have your criminal trial in French, no matter what your mother tongue, and even if you understand English. In addition, every accused must be informed of the possibility of having his/her trial in French. If a French trial is chosen, the Crown prosecutor assigned to the case must speak French, the accused has the possibility of obtaining a translation of the information and indictment (the documents that list the charges against the accused person) upon request, and a jury, if there is one, can be formed of French-speakers. Lastly, the decision may be granted in French even if not all of the proceedings were conducted in French (however, a substantial amount must have been in French).

Constitutionally-protected minority official-language rights are multi-tiered and quite complex. And they are still developing: throughout the country there are cases before the courts asking for further clarification of these rights. As with all aspects of our constitutional framework, these rights are living, breathing entities. Despite their complexity, however, it is important that citizens understand these rights, especially if they are trying to assert them. More detailed information about these rights  is available at: Canadian Legal FAQs – Constitutional Language Rights

Carole Aippersbach was a lawyer with the Centre for Public Legal Education in Edmonton, Alberta.