A Website of The Centre for Public Legal Education Alberta
You are here: Home / Feature Articles / 38-5: Vulnerable Youth and the Law / The Protection of Young Workers in Canadian Employment Law
Reading Time: 7 minutes 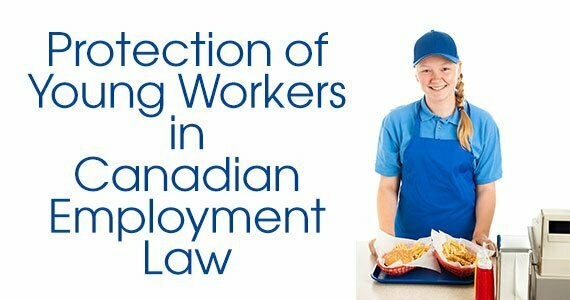 In this article we briefly examine the justification for special laws relating to the employment of younger workers, and then set out those special laws.

The Reason for Protective Laws for Young Workers

Employment is a legal relationship between an employee and an employer.  It is thought that there remains such a serious power advantage of employers over workers that government must intervene to regulate and protect workers from the abusive tendencies of their employers.  This legal protection is even more important for young workers. Young workers continue to develop their physical, social and mental skills and judgment.  They may find it more challenging to protect themselves from injury or overwork.  Unscrupulous employers in an otherwise unregulated, competitive free market – at least in theory –may seek to take advantage of young people wanting to work and earn income by paying and training them less while working them harder and in more dangerous tasks.  Youth are perhaps the most at risk of falling into such exploitation.

Historically, this phenomenon occurred during the industrial revolution.  The story of Oliver Twist can act as a good example of youth exploitation driven by capitalistic myopia.  Oliver Twist was published in 1836, three years after the Factories Act of 1833 was passed in England.  This legislation limited children’s work hours, but was only the first step in protecting young workers.  Since then, youth workers have been protected by legislation, especially in the developed world.

While youth are at risk of exploitation and disadvantage in the workplace, there is a value, indeed a social necessity, in youth learning the discipline of paid work and its benefits. Historically, this phenomenon occurred during the industrial revolution.  The story of Oliver Twist can act as a good example of youth exploitation driven by capitalistic myopia.  Youth employment is an essential bridge into adult employment.  Employment provides not only financial support, but also a contributory role in society.  It can furnish a great sense of self-worth and dignity. (Re: Public Service Employee Relations Act, (Supreme Court of Canada, 1987))  Youth work legislation seeks to strike a balance between allowing for youth to learn, gain experience and earn some income on one hand, and protection from obvious employer exploitation and injury on the other hand.

Child welfare and employment are within provincial jurisdiction in the Canadian Constitution. This means that, by far, most of the young worker legislation is created at the provincial level.  This means each province has enacted different legislation according to its own priorities, standards and coverages.  These are briefly reviewed below and in greater detail in the chart that is referenced later in this article.

The federal government also sets standards for young workers within its jurisdiction, referred to as ‘federally regulated industries.’  While these federal rules are mirrored in provincial legislation, remember that the federal government regulates only a tiny percentage of Canadian workers. Almost all workers are regulated by provincial legislation. These include the federal public service, banks, railways, nuclear energy, shipping and interprovincial trucking, telecommunications, aeronautics and so on.  The Canada Labour Standards Regulations state that persons under 17 years of age may be employed provided that:

In this chart (PDF), we show how each province and territory protects young workers.  Each province does it in a slightly different way.  The common element among provinces is that the child’s education, health and well-being are protected foremost.  Youth work legislation seeks to strike a balance between allowing for youth to learn, gain experience and earn some income on one hand, and protection from obvious employer exploitation and injury on the other hand.  Parents, employers, directors, teachers, and government labour officers must be aware of their provincial legislation and standards and to do their part to help protect young workers.

Most provincial and territorial law is contained in ‘minimum employment standards’ Acts, Codes and Regulations.  For example, in Alberta, the Employment Standards Code covers hours of work (Division 3).  The Alberta Employment Standards Regulation covers minimum wage (Part 2). Minimum wage rates per hour vary across the nation but all are around $9 – $11. Other specific laws regarding adolescents and young persons are found in Part 5 of the Alberta Regulation.  A few jurisdictions, notably Ontario, Saskatchewan and Yukon, set their limitations on youth employment in other statutes.  Overall, young worker protections relate to minimum wages, working hours and types of jobs youth can perform.

Some Highlights from Alberta

What is the legal classification of a young worker?  Section 51 of the Alberta Employment Standards Regulation delineates two categories of young workers.  In Part A, “adolescent” is an individual 12 to 15-years-of age.  In Part B, a “young person” is any individual from 15-years-old to their 18th birthday.  In Alberta, at least, a young person is older than an adolescent.  There are different rules for each category relating to kinds of work, hours, shifts, required supervision, etc.

Adolescents are limited by the types of jobs and hours they are allowed to work.  They can work outside of normal school hours as defined in the Alberta School Act, RSA 2000, cS-3 if they are employed as a delivery person of small wares for a retail store, clerk or messenger in an office or retail store, delivery person for the distribution of newspapers, flyers, etc., or an occupation that is approved by the Director of Employment Standards.  The employment must not be injurious to the life, health or welfare of the adolescent worker. The employer must complete a Safety Checklist and ensure compliance with it in order to employ an adolescent.

A parent or guardian must consent in writing to the employer for the adolescent to be employed.  Adolescents must not work for longer than two hours outside of normal school hours on a day in which they are required to be at school, or work for longer than eight hours on a day in which they are not required to be at school. These restrictions on hours also relate to shifts, as no adolescent is allowed to work overnight from 9:00 p.m. to the following 6:00 a.m.  Adolescents must also be constantly supervised by someone over 18 while at work.  Adolescent employment in Alberta is set out completely in Employment Standards Regulation, section 52.

Young persons, being slightly older than adolescents, enjoy more flexibility in work.  There are no restrictions on the type of work for young persons.  If a young person works in any retail business selling food or beverages, any other goods or in the hospitality industry during the period between 9:00 p.m. and 12:01 a.m., the young person must be supervised continuously by at least one other adult.  From 12:01 a.m. to 6:00 a.m., no young person can work unless the employer receives written consent from a parent or guardian and the young person is under constant supervision of an adult.

In most cases where a violation occurs, the province typically issues a cease-and-desist order and demands financial restitution for the young worker, if applicable. [1] Most cases do not go to trial so there is no readily accessible public record.  In 2009, at Edmonton’s Capital EX summer fair, Shelby Amusement Services employed a 15-year-old who was found working alone, serving refreshments after 9:00 p.m.  He worked until after midnight, also in violation of these laws.  The teen’s employer was found to have violated Alberta’s Employment Standards Code and the Employment Standards Regulation.  The employer faced fines up to $300,000 for the violations. [2]

A Glance at Three Other Provinces

British Columbia does not separate young workers into two categories like Alberta. Overall, young worker protections relate to minimum wages, working hours and types of jobs youth can perform. Rather, this province places conditions of employment for children 12 to less than 15 years of age, unless they are in the entertainment industry, where they can work from the age of 15 days.  A child must not work more than four hours on a school day and more than seven hours on a non-school day unless the employer receives approval from the Director. They must not work more than 20 hours in a week that has five school days, and in any case, more than 35 hours in a week.  A child may only work if under the direct supervision of a legal adult (someone at least 19-years-old).  The entertainment industry in British Columbia has more rules regarding child workers, relating to chaperones, daily hour limits, split shifts and hours free from work. (Employment Standards Regulation, BC Reg 396/95)

Manitoba restricts the employment of children under 16 and between the ages of 16 and 18.  In section 83(1) of the Employment Standards Code, CCSM cE110, no child under the age of 16 may be employed without a permit issued by the Director.  A child cannot be employed if under 12 years-of- age, or if the work adversely affects the child’s well-being.  Children under 16 years cannot work more than 20 hours during a school week or between 11:00 p.m. and 6:00 a.m. unless permitted by the Director.  Children under 18 cannot work alone; they must be supervised between 11:00 p.m. and 6:00 a.m. and they may not be employed in certain stipulated industries.

Under its Employment Standards Act,SNB 1982, c E-7.2, New Brunswick defines children as those under 16.  No industrial undertaking, forestry, construction, hotel or restaurant work is permitted under the age of 14.  Between 14 and 16, work may be performed that is not harmful, up to 6 hours in any day, or up to 3 hours on any school day outside of school hours, and not between 10:00 p.m. and 6:00 a.m.  Directors’ permits may allow exceptions.

Legislation exists in all 14 jurisdictions to protect young workers in Canada.  The rules relating to the nature of work, number of hours and when they can be worked (not during school or overnight), the age brackets for classifying young workers, supervision requirements and Directors’ overrides are all slightly variable across the country but they have similar intents, purposes and effects to protect the interests of young workers.

1. B. Barnetson, Effectiveness of Complaint-Driven Regulation of Child Labour in Alberta (2010)