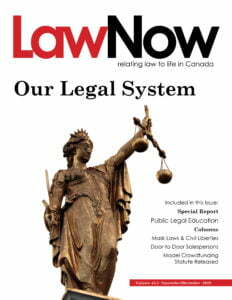 October 26th to 30th, 2020 is National Access to Justice Week. And we are celebrating with this issue! Read on for articles about different aspects of our legal system and perspectives on public legal education.

Retaining a Lawyer
Kevin Unrau
Before you become a client of a lawyer, you must first retain them. But retaining a lawyer is not always straightforward!

The Role of Crown Prosecutors in our Criminal Justice System
Thomas Kannanayakal
Governments employ lawyers to prosecute crime. In Alberta, these lawyers are Crown prosecutors.

Getting a Fair Say: Adjudicative bodies and the duty of fairness
Evan Oikawa
Administrative bodies play a critical role in many areas of the law – from human rights to municipal planning to labour and employment.

Public Legal Education: Unexamined theory constrains practice
Lois Gander, QC
An interdisciplinary field, PLE draws both theory and practice from a host of other disciplines, not just law and education.

A2J and Public Legal Education in 2020 in Alberta
Jeff Surtees
It is widely stated we have an access to justice crisis in Canada, but responses to it depend on what we think justice and access mean.

The Critical Role of Public Legal Education in Societies Governed by the Rule of Law
John-Paul Boyd
Public legal education programs fill a critical gap between formal access to justice we all enjoy in theory and the practical ability of individual Canadians to meaningfully access justice in their daily lives.