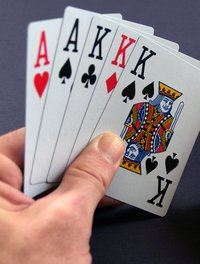 There seem to be plenty of opportunities to win – big and small – in our lives, from lotteries to radio contests to a friendly wager with a friend.  Whether it’s $10 on who wins the golf game, or $10 million from the lottery, does the tax man share in our good fortune?

In Canada, the answer is generally “no” – receipts derived by luck are normally classified as non-taxable “windfalls”.  Very little complicates a person’s income tax situation quite as much as crossing a national border.  While Canada does not tax gambling winnings, other countries have different tax laws.  The Income Tax Act specifies that no capital gain or loss results from the chance to win a prize, and that the cost of such a prize is equal to its fair market value at the time of acquisition.

The Canada Revenue Agency (CRA) notes, in Interpretation Bulletin IT-213R (Prizes from lottery schemes, pool system betting and giveaway contest), that prizes are not taxable as capital gains or as ordinary income, unless they can be found to be income from employment, a business or property, or a prize for achievement in “a field of endeavour ordinarily carried on” by the recipient.

Eyes on the Prize

While the prize itself is tax-free, any income generated from the prize remains taxable.  It’s probably unsurprising that the income from investing prize money would be taxable.  If the value of the prize appreciates over time, then any gains would be subject to taxation in the ordinary course.  This might be the case for the winner of a “dream home lottery” who sells the property ten years later. However, consider a “million dollar prize” which is not paid out in one lump sum, but over time.  For example, the winner receives payments of $50,000 annually for 20 years.  Assuming a rate of return of 2.5% (the Government of Canada 10 year bond rate), the right to receive $50,000 a year for 20 years is worth about $769,000, and that, not $1 million, is the prize won.  The remaining $231,000 is interest earned on that initial investment, taxable as received over the 20-year period.  The issuer of the annuity should issue T5 slips reflecting this interest income annually.  This could come as a nasty shock if the winner was not expecting to pay tax on over $19,000 of interest which would be part of the first year payment (gradually declining in future years).

As the cost is equal to the value of the prize, sale of the prize shortly after winning is unlikely to result in a gain, so the proceeds should be received free of tax.  If the value of the prize appreciates over time, then any gains would be subject to taxation in the ordinary course.  This might be the case for the winner of a “dream home lottery” who sells the property ten years later.  In that case, the owner may have resided in the property and possibly be able to realize any gains free of tax due to the Principal Residence Exemption (See “Your Principal Residence and Taxes”, by the same author, LawNow Jul/Aug 2013).  Many other prizes will not likely gain in value over time – the winner of a sports car, for example, faces little risk of a future sale for more than the car’s value at the time they won it.

Can winnings be received in the course of business?  As with most tax matters, the answer can be uncertain, and is dependent on the facts.  For example, a lottery ticket retailer might be awarded a prize for selling a winning ticket.  This prize would be considered part of the consideration received for selling lottery tickets, and therefore included in the retailer’s business income.  It bears noting, however, that this interpretation reflects a change in CRA’s interpretation, communicated within CRA in the summer of 2013.  Prior to that, CRA’s interpretation, published in March, 1981, was that a prize for being the seller of a winning ticket was based solely on chance, and therefore was not subject to taxation.  This specific issue has never been addressed by the courts, so it is unclear whether CRA’s current or prior interpretation is, in fact, correct.

Know When to Hold ‘Em

There have been a variety of cases before the Tax Courts assessing whether gambling activities should be considered a business activity of a professional gambler, such that winning would be taxable, and losses deductible, as with any other business.  The courts have looked to a variety of factors in making such determinations, including the degree of organization of the gambling activities, any special knowledge, skill or private information possessed by the gambler, the extent of gambling activities and the gambler’s intention, whether personal enjoyment or entertainment, or playing for a profit.

A 1961 court decision (Harry Edgar Morden) contrasts the activity of a professional bookmaker with those of a typical gambler.  The bookmaker calculates the odds over an extended period of time, sets payouts such that the aggregate odds are in his favour, and accepts wagers on any result, at the quoted odds, thus creating an organized business methodology. There have been a variety of cases before the Tax Courts assessing whether gambling activities should be considered a business activity of a professional gambler, such that winning would be taxable, and losses deductible, as with any other business.  The individual gambler lacks such an organized, systemic approach, and any winnings are attributable to luck, as much or more than skill, and his activities are less the conduct of a commercial activity and more for personal entertainment.

A 1981 Tax Court decision (John Balanko), upheld by the Federal Court of Appeal in 1988, characterized the differentiating factor as one of risk, noting that risk-taking is necessary in any business venture, but that a characteristic of a business is the management or minimization of risk.

A 1997 case (Alvin J. Luprypa) addressed winnings from playing pool.  The court concluded that the taxpayer carried on a business of playing pool for profit.  He was a skilled player, practicing Monday to Friday afternoons, and playing at a bar, starting after 11 PM.  He was calculating and disciplined, managing risks carefully.  He drank alcohol only on the weekends, when he did not play pool, to gain an advantage over inebriated opponents.  As he carried on a business, his earnings were taxable.  However, the court also concluded that the taxpayer believed, reasonably, that his winnings were not taxable.  Penalties imposed for failure to report income either knowingly or under circumstances amounting to gross negligence were therefore reversed.

A 2006 case (Leblanc v. The Queen, 2006 TCC 680 (CanLII) ) addressed two brothers who, from 1996 to 1999, won over $5.5 million (net of losses) playing government-run sports lotteries.   They resided near the Quebec and Ontario border so that they could play in both provinces, typically betting $200,000 to $300,000 weekly.  They reviewed published odds for the games, eventually developing a computer program to calculate their betting approach.  Due to Lottery Corporation limits, they purchased tickets from multiple retailers, negotiating discounts until the limits were reduced to a level that this was no longer possible.  At one point they decided picking up the lottery tickets was too much work, so they hired three friends to pick the tickets up and increased their workforce when the limits were reduced. Eventually, they had fifteen “helpers”.

CRA asserted that they wagered in an organized fashion, using a system which ensured that any winning wagers would generate substantial prizes.  Their negotiation of discounts and hiring of fifteen helpers was advanced as support this was a business.  Expert testimony indicated that the odds against winning these sports lotteries were “astronomical”, and not remotely consistent with the payouts.  These odds could not be beaten by skillful play – skill played no part in winning or losing.    The court noted that the only evidence presented to show the brothers had a system was that they had won.  All other evidence pointed to compulsive gamblers who got lucky, and not to an organized business.  The winnings were not taxable.

Very little complicates a person’s income tax situation quite as much as crossing a national border.  While Canada does not tax gambling winnings, other countries have different tax laws.  The most common foreign tax jurisdiction for Canadians is that of the United States, where gambling and lottery winnings are included in ordinary income, and subject to taxation.

As well, Canadians winning prizes from sources in the United States are also subject to taxation.  Typically, the payor is required to withhold and remit taxes directly to the Internal Revenue Service (IRS) when the prize is won by a non-resident of the United States, generally at a flat rate of 30%.  Some forms of gambling winnings are exempt from withholdings, including blackjack, baccarat, craps, roulette and big-6 wheel.  The Income Tax Treaty between Canada and the United States permits taxable gambling winnings by Canadian residents to be reduced by gambling losses. However this would normally require the filing of a U.S. tax return, and provision of evidence of these losses.

With a Little Luck

Although the occasional court case has held someone to be a professional gambler, this is a rare exception to the general rule that gambling – win or lose – does not have income tax consequences in Canada.