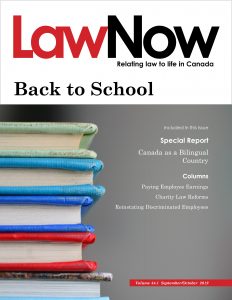 Feature Articles: Back to School

September marks the beginning of another school year. This issue looks at current legal topics impacting Alberta parents, students, teachers, and beyond. This issue also reports on Canada as a bilingual country.

Feature Articles: Back to School

In Loco Parentis
Peter Bowal and John Rollett
By way of the in loco parentis doctrine, teachers stand in essentially the same legal position as parents.

Distracted Driving and the Traffic Safety Act
Shaun Fluker
Distracted driving has become a major public safety issue with the proliferation of mobile technology and the in-dash features of modern vehicles.

Why is Canada a Bilingual Country?
Myrna El Fakhry Tuttle
Canada has two official languages: French and English. We always wonder why.

Other Official Languages in Canada
Charles Davison
There are other official languages in two territories: Nunavut and the Northwest Territories.

Note from the Publisher
Jeff Surtees

Employment Law
Peter Bowal
How Earnings Must be Paid

Law and Literature
Rob Normey
The White Angel: An excursion from Chinatown to posh Shaughnessy Heights and back